September has seen us clock up the miles with trips to Cornwall, Lancashire, and Hampshire. So today we stayed relatively close to home with an early morning drive to Birchington-on-Sea in Kent. A Grey Phalarope had been present and showing well the previous day. We scanned the bay but there was no sign of the Phalarope. We spent most of the morning walking up and down the promenade scanning the bay and waiting and hoping that the incoming tide would push the Phalarope into the bay. Unfortunately, the bird never appeared and we had to admit defeat.

On the way home, we stopped off at Oare Marshes as dad still needed the American Golden Plover for a year tick. Luckily this time the AGP was found among its European cousins immediately upon arrival.  Brian and I had already seen it earlier in the month at Shellness, but today it was showing much better than it did on that occasion.


It was pretty easy picking it out on the flood, but Brian also managed to get a shot of it in flight! 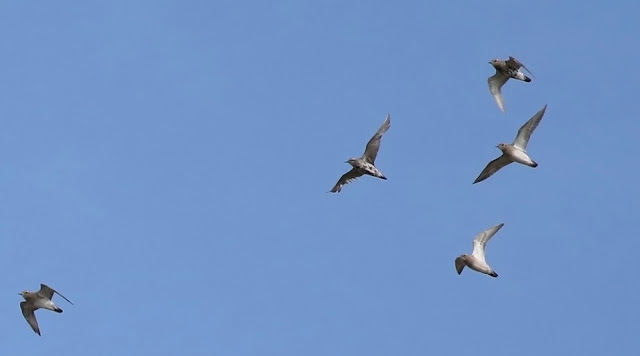