Leaving home at 6am this morning we headed up the M1 and dropped in at Kelham Bridge hoping to connect with Willow Tit. After scanning the feeders for several minutes a single bird came down to feed on the fat balls in the company of Great, Blue and Long-tailed Tits. 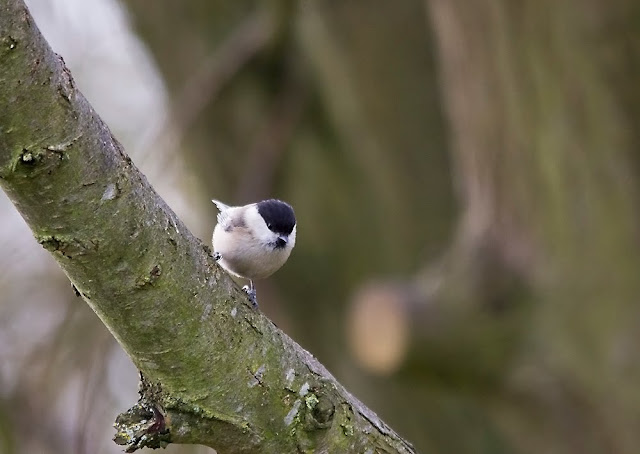 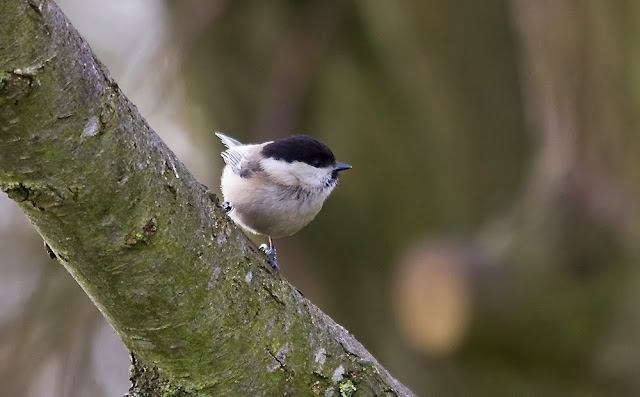 From Kelham we headed East and after thirty eight miles pulled into the car park at Rutland Water. Having collected tickets from the reserve centre we headed along the track. The Long-billed Dowitcher had again been seen on Lagoon III from the Shoveler Hide. The hide was packed with birders, leaving very little room to try and scan the area the bird had been favouring. Eventually we managed to grab a seat and eventually the Dowitcher appeared on the grass bank and then headed for the water's edge allowing us to get good views before we moved out of the hide to let others grab a look. 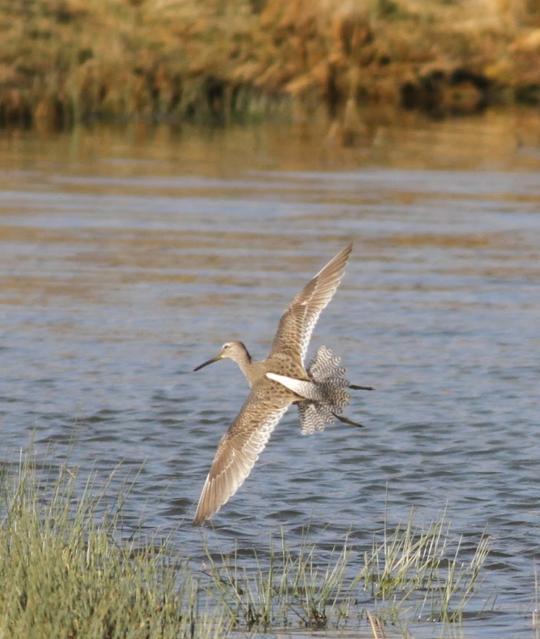 Before heading home we headed to Welney. News hadn't been good regarding the White Stork. With no positive sightings other than a brief flight view over Downham Market mid morning.
Plenty of birders had turned up in the hope that it might fly back in to roost as it had done the previous evening. But unfortunately there was to be no sign of the bird tonight.

P.S: Looks like the Polish rung White Stork didn't fly in from quite as far as Poland!!
Instead of the 1,751 km from Warsaw in Poland, It seems to have made the shorter trip of 50 miles from Shorelands Wildlife Gardens in Diss, Norfolk.
Statement on Shorelands website reads as below.

"As many people will know, we are working with a variety of colleagues to see if its viable to return the White Stork to the UK as a breeding species. One of the main questions has been will they migrate and we have been looking at European projects to see how best we might encourage this. We have been monitoring the rehabilitation of our Polish storks as three birds appear to be making full recoveries and we were wondering if we should return them to Poland. One bird appears to have made up his own mind and an adult male (Green Ring Z1213 - Metal Ring VN6073) was seen leaving our site and flying west and has been spotted at WWT Welney (approximately 50 miles west of Shorelands). What will he do next? Lets hope he gets his bearings returns to his Polish territory."

Before heading for Gloucester this morning we diverted along the M4 to Corsham in Wiltshire in search of the Hooded Merganser which we hope might be a future life tick.
Arriving shortly after 8am we made our way towards the lake and joined a small group of birders who had already been enjoying views of the bird. It remained distant for most of the time we were there venturing a little closer only once and quickly took flight to the far side of the lake soon after it emerged from behind the island.

With time short we headed off up the M4. Forty five miles later we pulled into the layby on the A417 opposite the Premier Inn at Barnwood. A small group of birders were already scanning Horsbere Lake. Almost immediately the Penduline Tits were showing among the reed mace heads. Constantly moving around the reeds, they proved a challenge re-locating them if you dared to divert your eyes away from them. 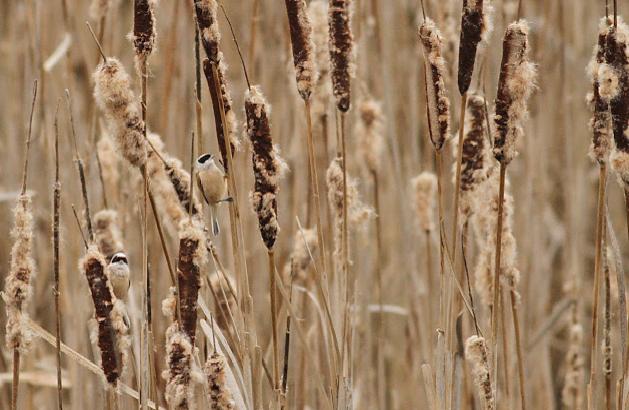 Two Chiffchaff were busy feeding among the bottom of the reeds and two large flocks of Common Snipe were disturb from the far edges of the lake, numbering at least 60+ birds. (The biggest number of Snipe I've ever seen).

From here it was a twenty mile trip to the New Fancy viewpoint. Having climbed the ramp, we joined the birders on the viewing platform and were put onto a pair of displaying Goshawk almost immediately!
They circled high in the sky before tumbling down below the tree-line and one peeled away to settle in a pine tree, allowing great scope views. Several Raven were seen from here and one flew directly overhead and Common Buzzzard were numerous in the area. Shortly before leaving we enjoyed fantastic views of a single Goshawk as it circled round and then ventured even closer to the viewing platform.
Having enjoyed views of Crossbill coming down to a puddle at Parkend last year we tried our luck again. Although no birds ventured down this time, we did managed to see a pair perched in a tree across from the church gate.
A short distance from here we had heard that Hawfinch had been feeding under Yew trees recently. So we parked up and sure enough one came down to feed among the leaf litter. 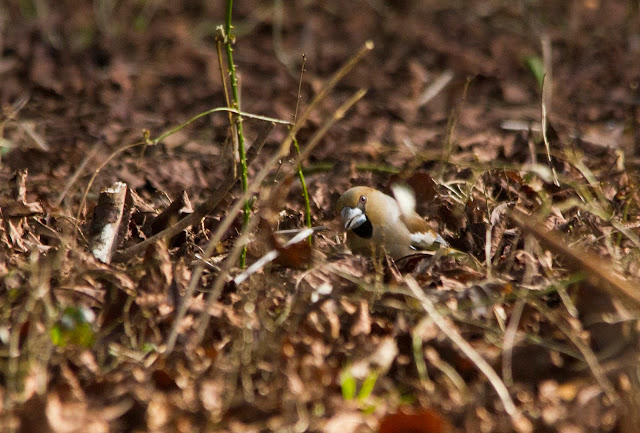 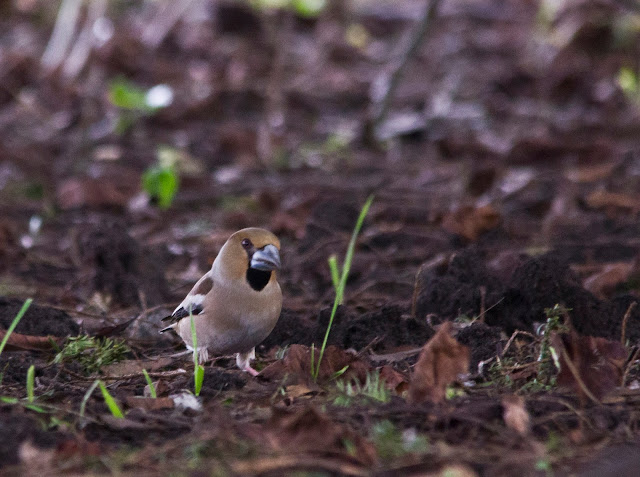 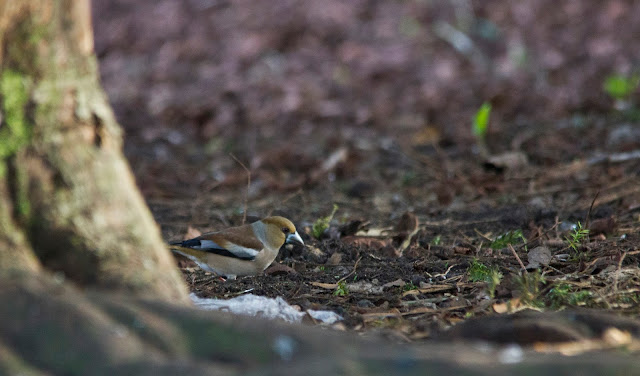 A great way to end a very enjoyable days birding.
Posted by Jim No comments:

A bonus trip to Dungeness was rewarded with superb views of the Glaucous Gull.
A huge individual, spending it's time either relaxing on the shingle near the fishing boats or roosting on the grass close to the fish hut. 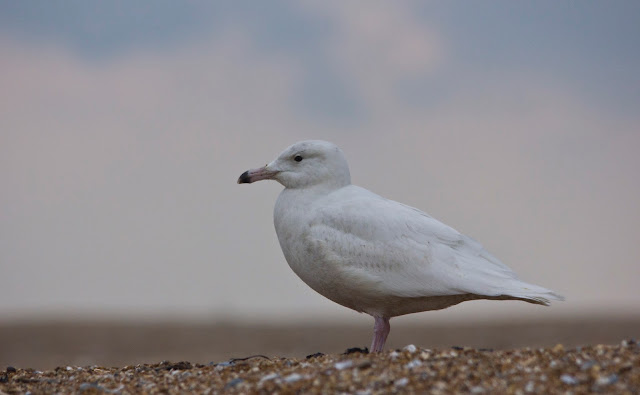 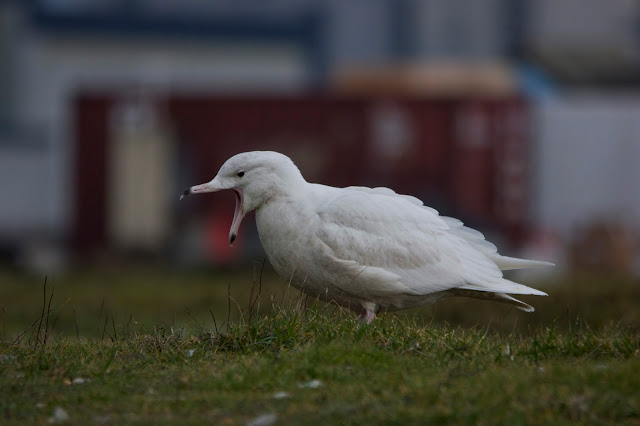 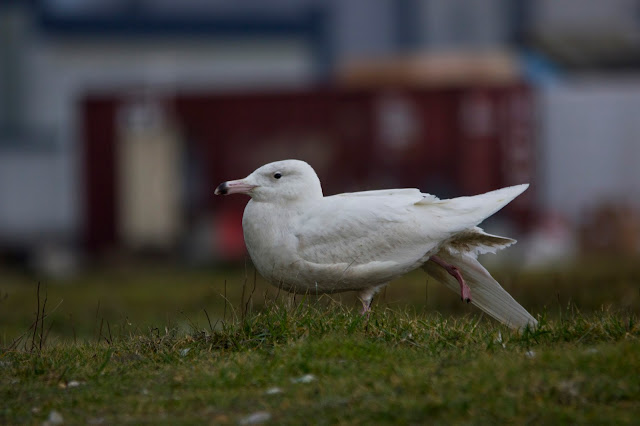 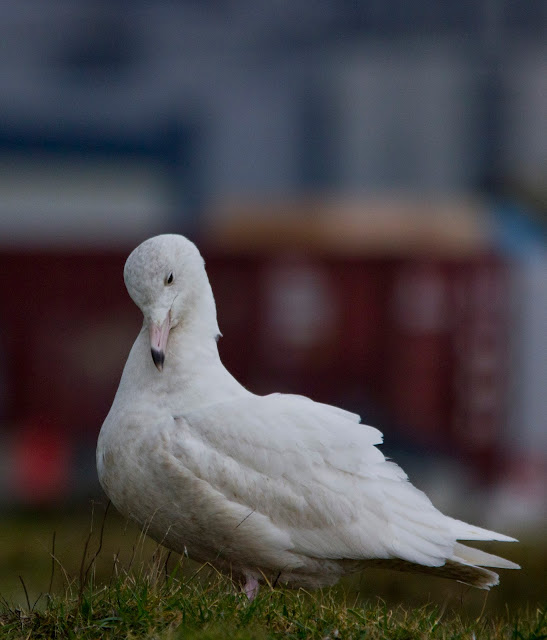 After watching and photographing it for over an hour, we took a stroll around the reserve. The two Long-eared Owls were found after a bit of scanning with the scope. Sitting further back among the bushes on the opposite side of the dipping pond. The only other highlight were a pair of Bearded Tits feeding close by among the waterside reeds.
A scan of New Diggings added good scope views of two Slavonian Grebes, before we made a short return to the beach for another look at the Glaucous Gull before heading for home.
Posted by Jim No comments:

Setting off this morning we had two targets in mind. First up was a visit to Lackford Lakes hoping to connect with the long staying Long-tailed Duck. Having been present since the 4th November we were optimistic as
we walked the paths from the visitor centre. Scanning each body of water from each hide, enjoying good views of at least three Kingfishers, and several pairs of Goldeneye but failed to locate the target bird. Walking back along the grass track past the Atlas hide I got the bins up to watch a male Goldeneye fly across the lake and as I did the Long-tailed Duck popped up on the far edge of the lake near a small island. Having enjoyed some good scope views in between lengthy dives we headed for the car park.
The second target was another long staying bird, the Great Grey Shrike at Grime's Graves. Having Parked up opposite the gate, we headed off down the path towards the second gate and began scanning the meadow. An hours search produced several Stonechat and a flock of at least nine Yellowhammers. Having almost given up on the shrike dad spotted it tucked into a small bush. Shortly afterwards it re-located to a more open area. 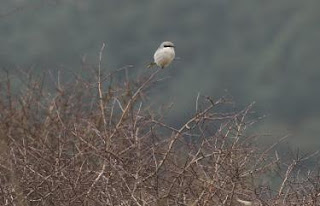 Both visits had proved frustrating but both had ended with good views of both the target birds.
Posted by Jim No comments:

I met up with Brian at 6am and headed towards our first destination of the day which was to be North Warren RSPB reserve in Aldeburgh Suffolk. Several scans of the marsh from Thorpe Road produced a large flock of Barnacle Geese along with good numbers of White-fronted and Greylag Geese. Snipe and lapwing were also present in good numbers and an early morning Marsh Harrier surprised a fox which was patrolling the edges of the reeds. Another scan through the Barnacle Geese flock finally located the two Bean Geese (Tundra) we had been searching for.
Our next target was the Green-winged Teal at Blythburgh, but we made a brief detour to Dunwich cliffs and quickly located several Dartford Warblers. 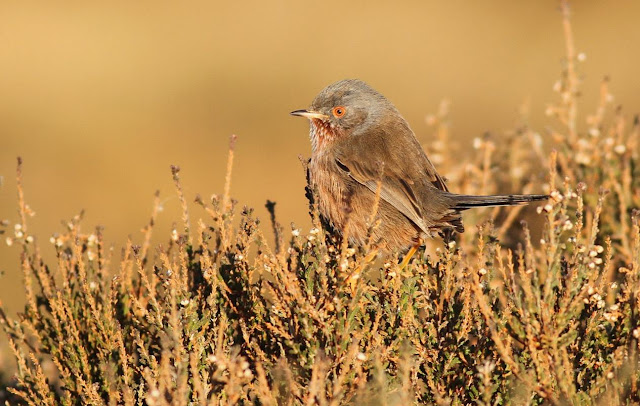 The Green-winged Teal was only 5 miles from Dunwich and after parking up in the car park just before the causeway bridge we joined a small group of birders on the footpath and enjoyed good if distant views of the bird on the far bank. The flock eventually flew onto the water and the nasal saddle became clearly visible as it turned back and forth on the water. (I'm not a fan of these nasal saddles, I find them to be far too intrusive on the bird.)
Before heading to Norfolk we made a brief stop at Ness Point, Lowestoft and found three Purple Sandpipers feeding among the rocks and surf, with a further four birds giving flyby views.


Moving into Norfolk, first stop was Winterton Dunes NNR. Having parked up in the car park at the end of Beach Road we made our way towards North Beach. A long walk out finally paid off with a group of thirty or so Snow Bunting feeding among the dunes and on the beach in the company of a couple of Sanderling and Ringed Plovers. While Brian crawled around in the sand photographing them I had a scan of the sea and bagged a few Red-throated Divers moving through for another year tick. 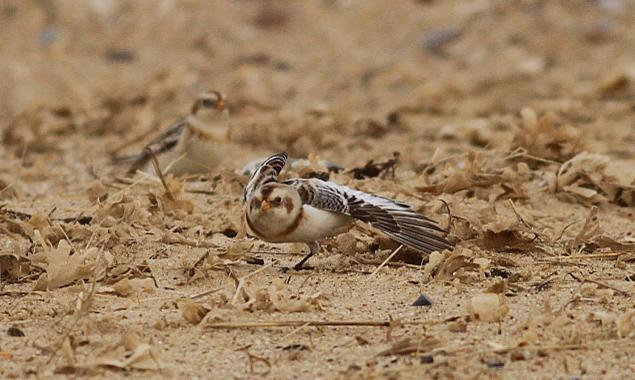 With Brian still needing European Shag for a year tick, Wells was our next destination. This was easily found as we pulled up at the quayside.
We moved onto Holkham Park and with the main park only open to pedestrians it was a longer walk to the lake than expected. A search of the lake from the South end to the North and back again finally produced sightings of two drake Scaup, the Ferruginous x Pochard hybrid and the Ferruginous Duck.
On route to Brancaster, we stopped briefly to watch a Barn Owl perched by the side of the road, but a very short but heavy rain shower soon had the owl heading for the nearby barn.
A quick stop at Brancaster Staithe and we were soon put onto the Red-necked Grebe by the locals. It was favouring the left-hand channel instead of the normal channel we had found it in on previous visits.
The Pallid Harrier had proved a very difficult bird, having failed to connect on a visit to Snettisham and a further six separate visits to Flitcham we were not confident of seeing it this time either.
We arrived around 3.45 to find the dirt track lane filled with parked cars on both sides. Having walked out onto the heath we joined the fifty or so birders already in position and connected with the bird instantly!
Having enjoyed good if distant views of the bird hunting along the far side of the heath, we were then treated to fantastic views as it emerged from behind us and flew directly overhead. Brian grabbed a record shot but the bird was reduced to a silhouette with the sinking sun behind it. It then starting hunting across the heath in the company of 3-4 ringtail Hen Harriers. Finally, it decided to land on a post giving superb scope views to the assembled crowd. 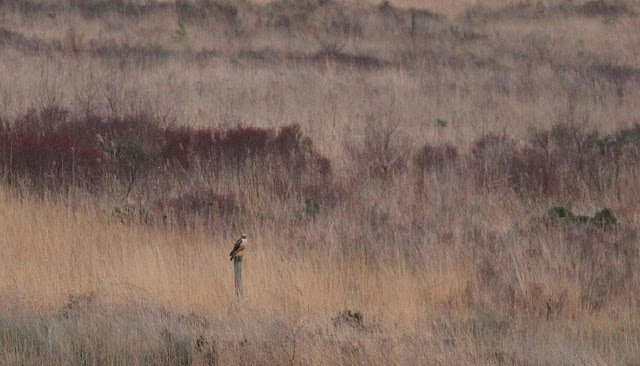 A superb days birding ended with the bogey bird finally seen!
Posted by Jim No comments: