Prior to 2010, most of my birding was confined to local patches and holidays. Subsequently, I had missed the previous two visiting Green Herons. (25/10-09/11 2008 Hythe Kent & 06/10-01/12 2010 Heligan, Cornwall).
I have seen several Green Herons during holidays to the US, but the chance to see one in the UK, albeit 260 miles from home proved too tempting. We left at 4am and with minimal traffic on the roads at this hour we arrived in the village of Llan-mill in Pembrokeshire around 7.30am. A fifteen-minute walk followed before we reached the end of the track and the home of Simon Hart MP. We were met by another birder who directed us to the garden viewing area. There was a small stream running along the back of the garden and the pond was situated behind the stream. The Heron was seen immediately, perched on a small branch at the back of the pond. During our three hour visit, it became more active and began flying to different areas of the pond.

This was a very enjoyable twitch, with great scenery, very accommodating hosts and not a hint of anyone misbehaving while on site. The coffee was also very welcome. 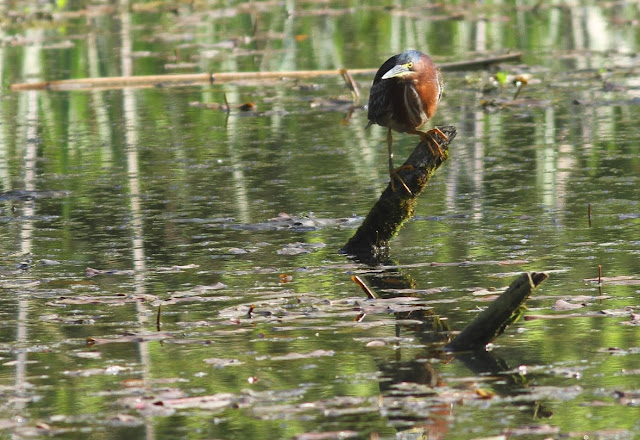 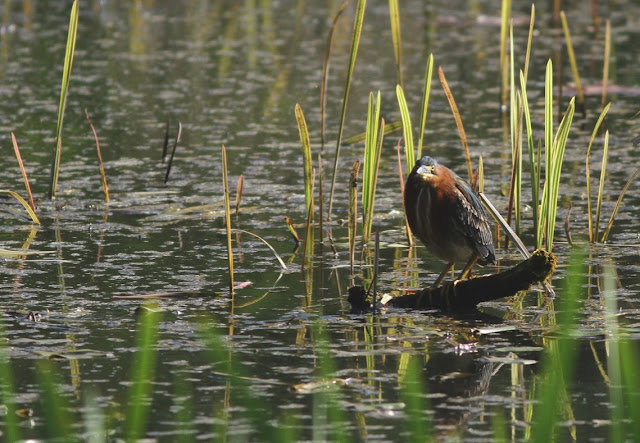 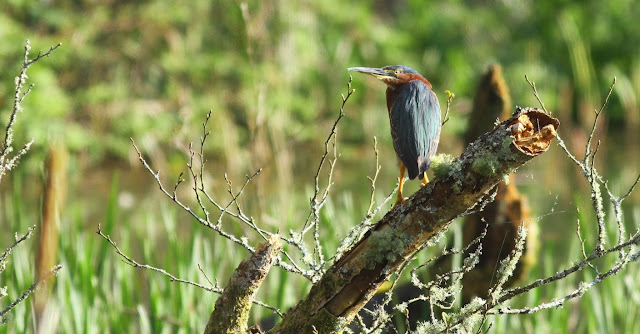 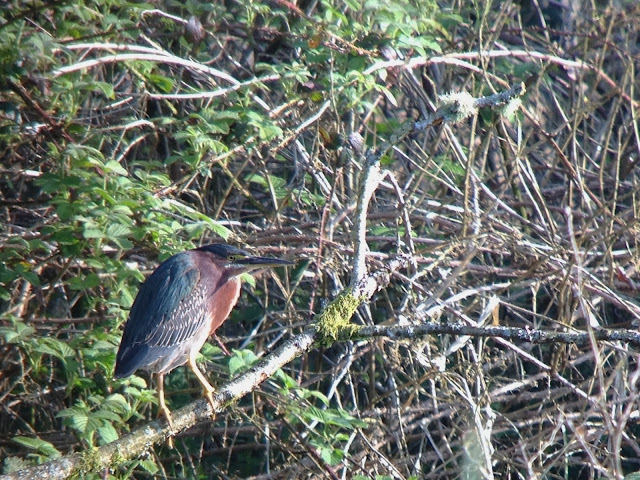 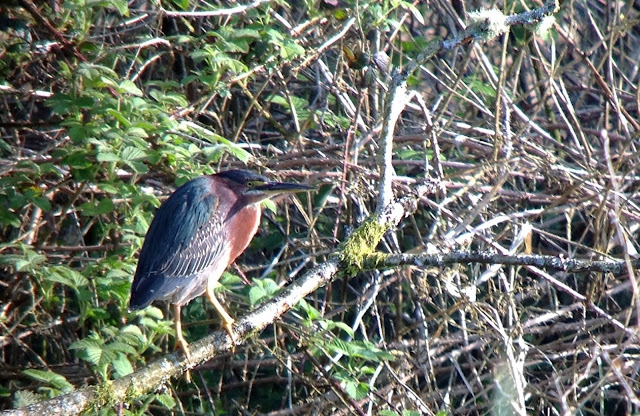 After leaving Llan-mill, it was just a short drive to Blackpool Mill, this used to be a very welcome place to stop off and enjoy Cream teas. Now, unfortunately, it's closed and going to ruin. It is however still a reliable site for Dippers. After a longer search than normal two Dippers were seen. The longer search may have been due to a fisherman fishing close to the bridge.

There was still enough time to visit the Deer Park at Marloes. This is where you would come to catch the boat across to Skomer. Unfortunately, we didn't have enough time to do this but instead went in search of Chough. Normally you can hear the birds before you actually spot them, but today they remained silent. Eventually, we managed to see three birds. A scan from the headland of the Deer Park across to Skomer added good numbers of Puffin for another welcome year tick. Wheatears seemed to be everywhere here, with at least 20-25 birds seen. A Raven dropped in to drink from a puddle and a single Stonechat was also seen. The only other year tick came in the form of two House Martins that zipped low across the grass providing me with my 200th bird of the year.

Last Sunday we were searching for newly arrived migrants and dodging the rain showers in Kent when news broke of the continued presence of the American Bittern at Carlton Marshes. Unfortunately, we were further from the site then, than we would have been if we were at home. Today we had the opportunity to visit the site and give ourselves the chance of seeing this rare visitor from across the pond.

Arriving shortly after 7am we took the footpath opposite the main car park. As we approached the first stile and gate we heard the distinctive "reeling" of a Grasshopper Warbler. After a walk of maybe 3/4 mile, we found the birders already present strung out along the footpath trying to grab a decent vantage point. Scanning the surrounding area I managed to find a male Ring Ouzel perched at the top of a small Elder. During the next four hours, there was no sign of the target bird. Marsh harriers were very active collecting nest material and several birds were seen in the air at the same time.

Two Cranes flew overhead and a Wheatear dropped in. Another year tick came in the form of a Whimbrel, that dropped onto the flooded field right in front of us.

Then the American Bittern appeared low over the reeds, Approaching the edge of the reeds it dropped down right in front of us but disappeared into the reeds and was lost to view. All was quiet for another two hours and then a phone call from a birder further down the track saying he had the Bittern, saw the whole crowd move as one to join him. Directions were a bit sketchy but eventually, I  managed to get some nice views as it popped up from within the reeds, before it again disappeared from view. 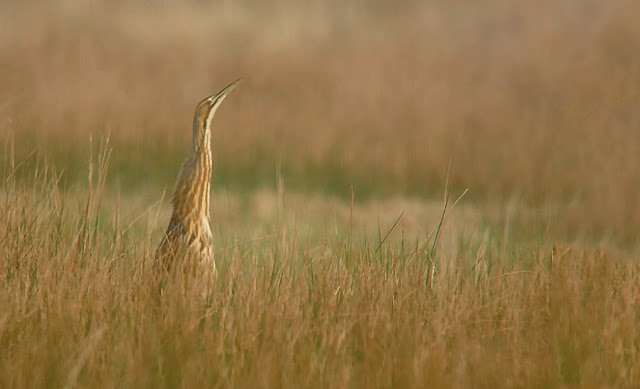 All that was left to do was to add a donation to the collection bucket and head back along the footpath towards the car park. Bagging another year tick when a Willow warbler began singing from the nearby trees.

A short stop off at Cavenham Heath before heading for home added another couple of year ticks At least three Stone Curlew were found and then two showy Woodlarks dropped in right by the roadside.

After a 10.6 million pound investment by the London Wildlife trust, Waltham Forest Council, Thames Water, and the Heritage Lottery Fund, Walthamstow Reservoirs has been revamped and renamed.  known now as Walthamstow Wetlands it's reputed to be Europe's largest urban wetlands reserve.  The reserve is free to enter but if visiting by car there are varying car park tariffs dependant on how long you stay.
It opened to the general public in October of last year and it doesn't seem to have had any detrimental effect on the quality of birds seen. Since the new year Little Bunting, Bluethroat, and Hoopoe have all been seen.
Another quality bird was reported today, this time it's a Ring Ouzel. Present for the third day it had been showing well on the 11th then elusive on the 12th. With an early report this morning we decided to pay the site a visit. We headed for the old pump engine building (now visitor centre and cafe). The bird had been frequenting an area favoured by the Little Bunting between some concrete blocks and the start of East Warwick Reservoir. After a brief search, the Ring Ouzel flew in from behind us and landed on the short cropped grass to feed. It fed for a short time then flew to nearby trees and bushes either side of the footpath 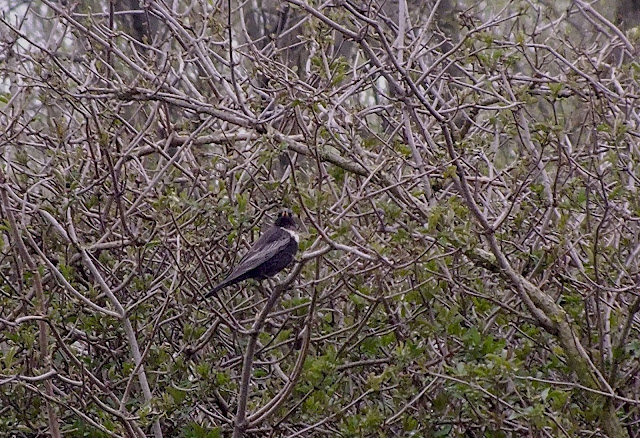 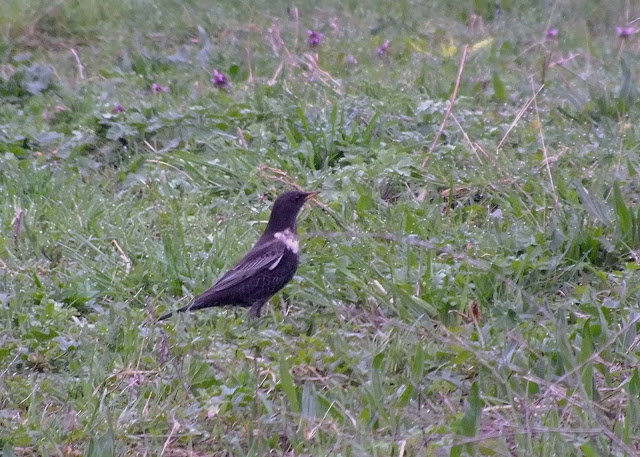 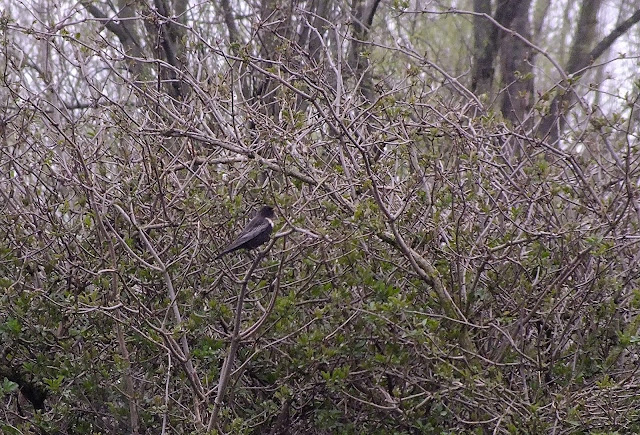 A walk around Reservoirs 1-5 failed to locate any Yellow Wagtails but did produce double figures of White Wagtails along the causeway of reservoirs 4 & 5. Hirunndines were scarce, in fact so scarce we didn't see any! Chiffchaffs and Blackcaps were vocal in several areas as were Sedge Warblers and the trees along the causeway of reservoirs 1, 2 and 3 produced several Brambling.

On the way home, we dropped in at KGV Reservoir and watched a single Swallow before leaving the car park. As we headed up the slope a male Wheatear appeared on the grass and then made use of the fence posts. 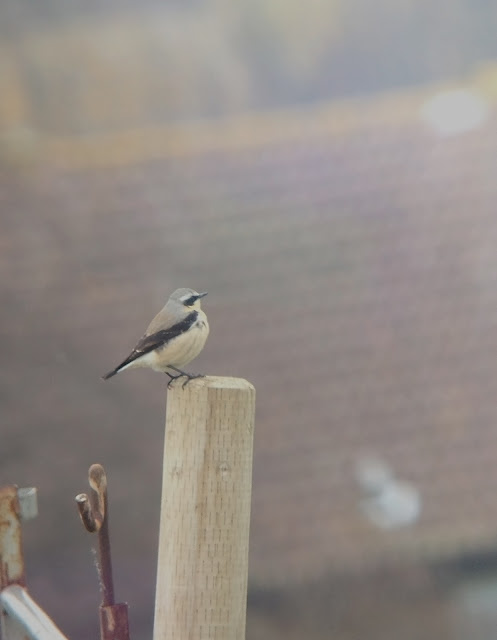 A scan from the Southern end of South basin added another year tick in the form of two Arctic Terns. While a scan from the sailing club hut added 5-6 more Arctic Terns three Common Terns and a single Little Gull.
Posted by Jim No comments:

Dodging the rain searching for migrants at Dungeness

A gloomy start to the day greeted us upon arrival at Dungeness this morning. A brief seawatch from the beach produced my first Sandwich Terns of the year but the constant misty rain made visibility very poor and with a complete lack of wind there was no bird movement. A single flock of Scoter resting on the surface along with several Gannets, Auks and Porpoise were the only sightings of note.
We moved back inland and managed to locate a single Wheatear close to the Lifeboat Station before a drive along the entrance track of the reserve added several newly arrived Sedge Warblers. We scanned Dengemarsh from Springfield Bridge and soon located the Slavonian Grebe, now looking even smarter in almost full summer plumage. A bonus year tick came in the form of a "Booming" Bittern from within the reedbed.

We dropped in at Oare Marshes in search of the long staying Long-billed Dowitcher. Last year it was seen several times on East Flood but this year it had proved much more difficult. Three previous visits had failed to locate it. There was again no sign after a walk along the creek South of the sluice and back again. On our return a flock of Black-tailed Godwits had flown into roost on one of the grass islands on East Flood, so another scan of East Flood began. Again we failed to locate the LBD among the Godwits and headed back along the seawall towards East Hide leaving fellow Essex birders Doug & Tina to continue the search.    A scan of the paddocks near East Hide failed to turn up any Yellow Wagtails but did produce views of a Little owl.
A look back towards the seawall proved to be a wise move as Doug & Tina were pointing towards the Flood. We re-joined them on the seawall to find they had managed to locate the bird asleep among the Godwit flock. It remained asleep and didn't look like it was going anywhere soon so we headed back round to view the Little Owl and found two birds this time.  Eventually, the Godwits took to the air allowing for some nice flight views of the Long-billed Dowitcher among them before they again settled back down on the island. 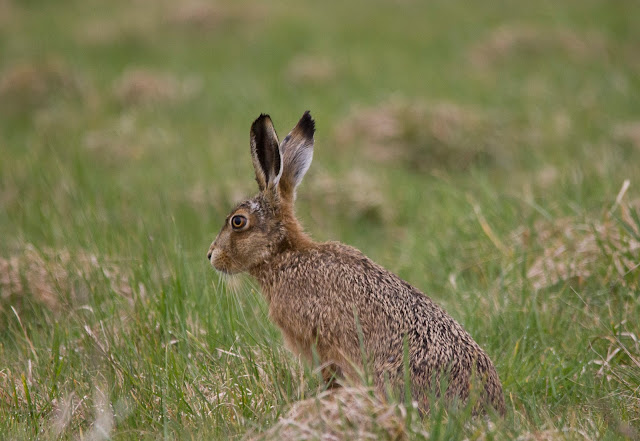 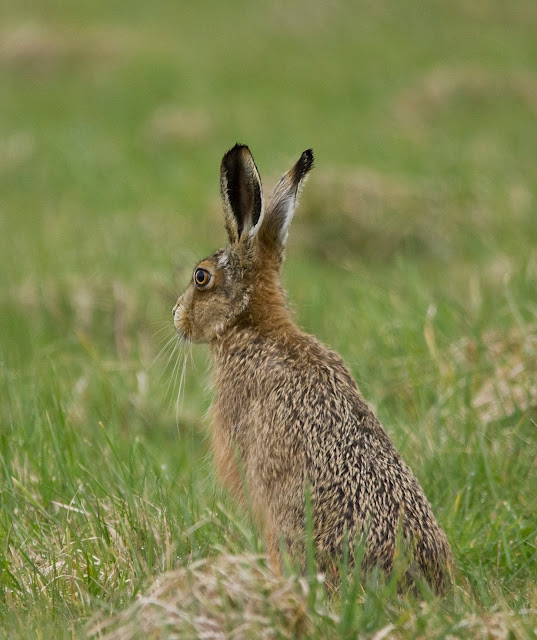 Skylarks were singing overhead and one dropped onto the track as we approached. 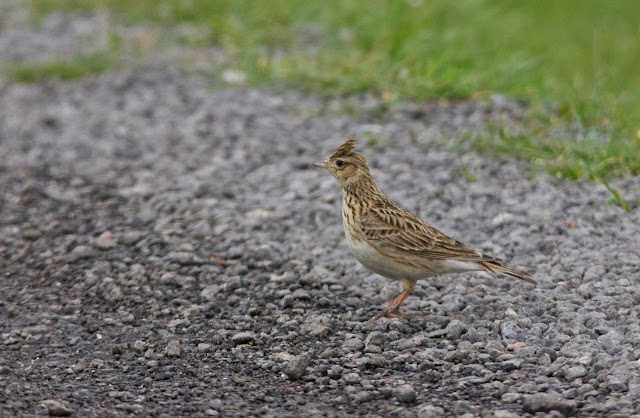 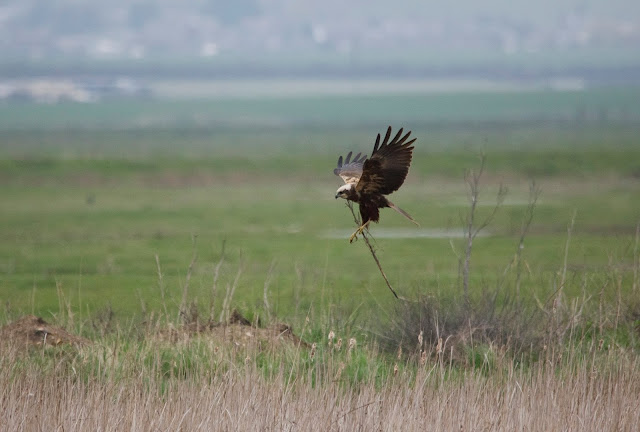 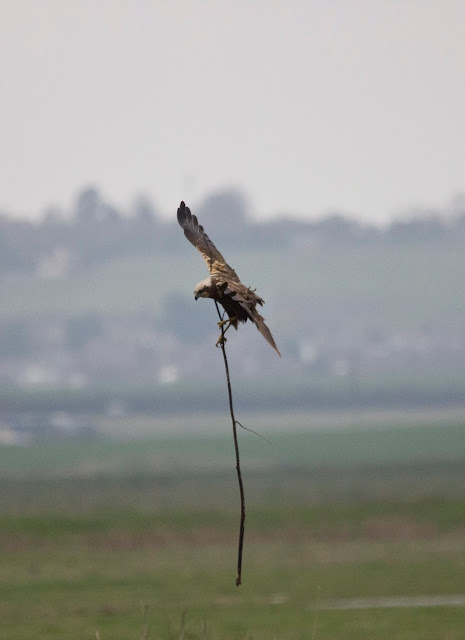