The day started with a 7am drive along Dungeness road heading towards the old lighthouse, having already found two newly arrived Black Redstarts perched up on the ruined wooden building near the new lighthouse.
Parking up in the small car park just outside the power station walls, we begin a search of the gorse bushes between the lighthouse and bird observatory and quickly found the bushes to be alive with Goldcrests and Firecrests! 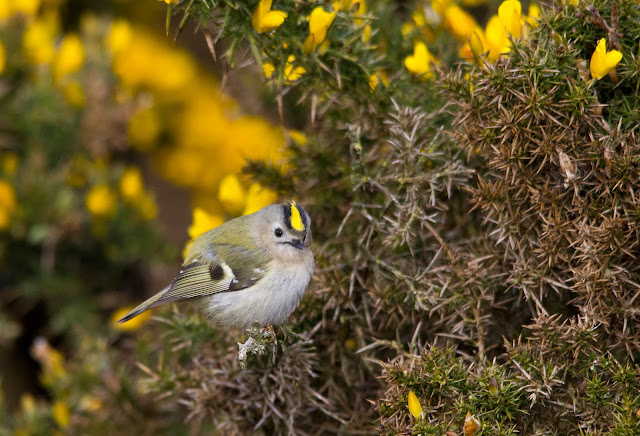 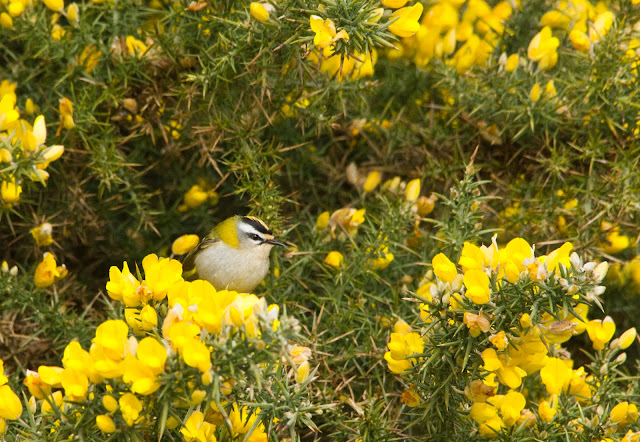 Returning from the moat at the observatory Brian picks up a Woodcock flying along the perimeter fence of the power station, luckily it flies straight along the fence line giving me plenty of  time to follow it.
We return to the old lighthouse garden and find several more Firecrests flitting about on the grass. Also in the garden compound were three newly arrived Chiffchaffs and two continental Coal Tits.
Brian walked the shingle between the lifeboat station and fishing boats and was rewarded with a female Wheatear.
A drive along the track at the reserve produced views of two male and a single redhead Smew along with a single Great White Egret. A drive along Dengemarsh Road added plenty of Meadow Pipits, Reed Buntings and Stonechats, but we failed to find any Wheatear. 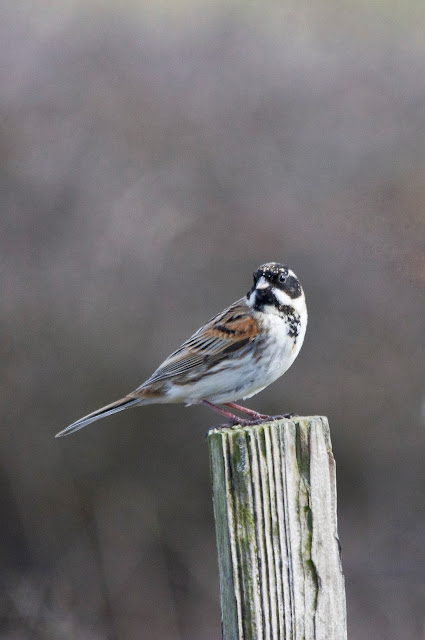 We took a detour on the way home and dropped in a Elmley NNR, arriving quite late in the day we only had time to drive along the entrance track, but that proved very rewarding with great views of several Marsh Harriers, Redshank, Lapwing and Little Egrets and stunning views of a Jack Snipe close to the track. 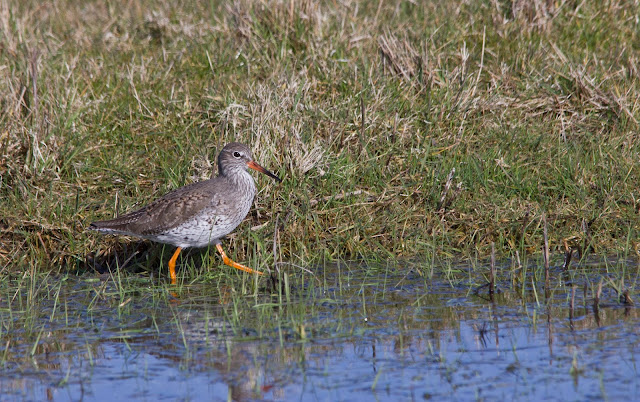 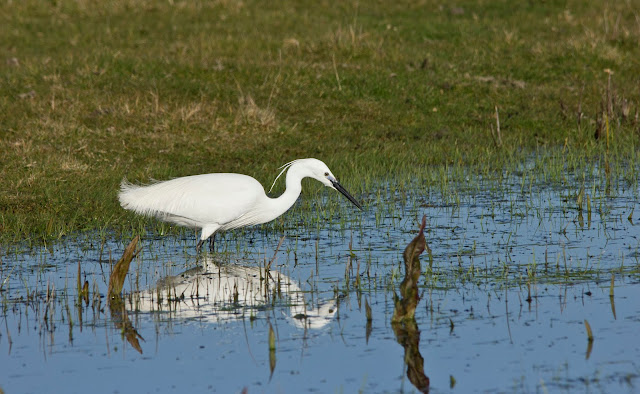 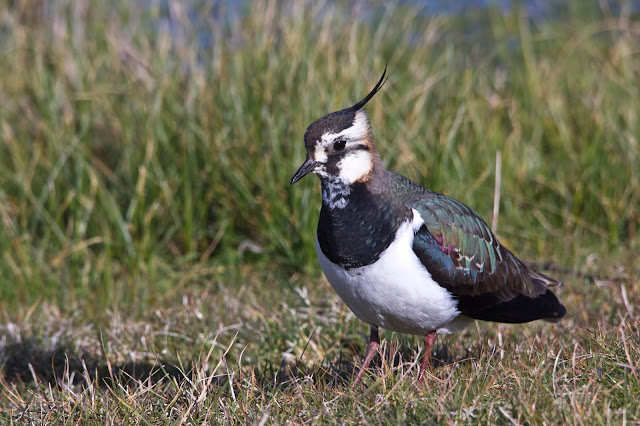 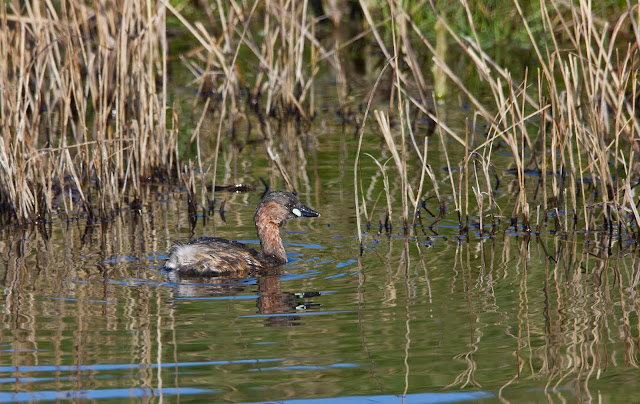 Before leaving for home a Short-eared Owl dropped in close to the track side ditch ending what was a superb days birding. 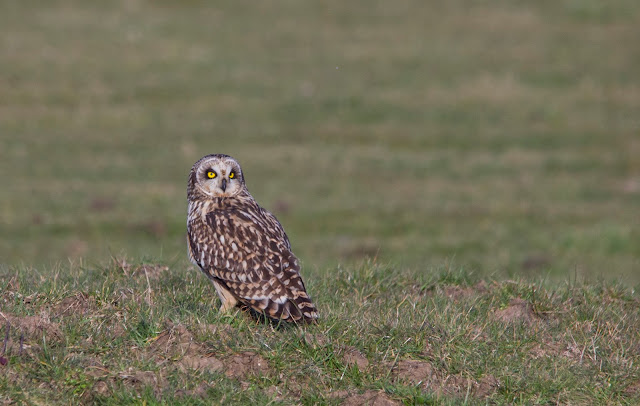 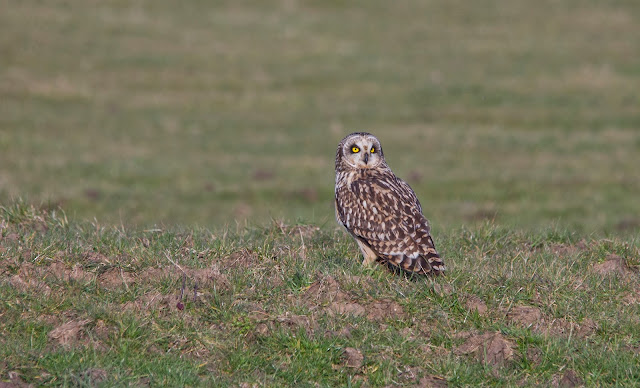 Although we only drove the along the entrance track, I've not seen it look this good for a long time! Obviously there has been plenty of hard work taking place behind the scenes and it is definitely paying off. Congratulations to all concerned.
Posted by Jim No comments:

An early morning visit to Rainham Marshes this morning, The draw bridge was still raised as we pulled into the car park, luckily Howard allowed us early access.
A Jack Snipe had been present on Purfleet Scrape for a few days previously, so we began the search from the hide. Plenty of Common Snipe were seen along with Redshank, Dunlin, Teal and Wigeon. A Spotted Redshank and a single Water Pipit were much more of a surprise though.
Among the reeds a good Jack Snipe candidate was found, but before the ID could be confirmed two Moorhens came crashing through the reeds and the Snipe disappeared without trace!
A quick cup of tea from the reserve centre and we were back out searching the scrape. Another scan of the far edges produced several more Common Snipe and finally good if a little distant views of a Jack Snipe. It darted in and out of the grass at the waters edge several times allowing most of the other birders present decent views. Unfortunately the bird remained well out of range for the camera, Photo below is from last year's Rye Meads trip.

A grey and misty start to the day in Suffolk never really improved throughout our visit. The day started with a drop in visit at Lackford Lakes, where we failed to find the reported Jack Snipe from the previous day. Despite an extensive search the best we could do were several Common Snipe, Kingfisher, Teal and  a single Muntjac Deer.
We moved on the Lakenheath and after a brief chat with the warden walked out to the Joist Fen viewpoint. Several Marsh Harriers were busily collecting nest material and a single Buzzard was seen perched on a fence post amongst the reeds. A Sparrowhawk flew low and fast past the viewpoint and a Cetti's warbler showed well nearby. A Bittern flew overhead and headed for the far end of the reedbeds for a welcome year tick. With no sign of any of the Cranes, Brian decided to head off along the riverbank to scan the fields bordering the river. A short while later two of the Cranes fly directly overhead and fly in Brian's direction. I walk out to meet Brian who has just watched four birds land in the fields nearby. 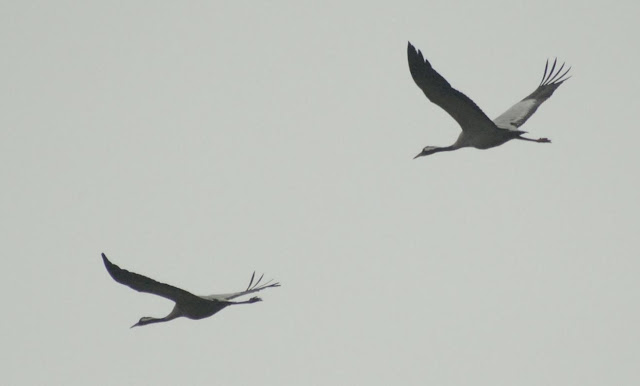 On the pools just outside the reserve we find a single Great White Egret, but a visit to Santon Downham failed to produce any sightings of Lesser-spotted Woodpecker.

The Hoopoe at Wall Heath in Staffordshire had recently clocked up its 100th day at the site. First reported on the 25th November it was still present at the beginning of this week.
Today we finally made the 140 mile trip around the M25 then up the M1 and across the M6 motorways eventually arriving at the quarry at Wall Heath around 7.45am. There had been no reported sightings of the bird the previous day and after nearly an hours searching we had not managed to locate it. Skylarks were displaying high above us and Meadow Pipits were flitting about along the fence line, as I scanned the pipits on the fence again a small movement in the grass below caught my eye. It was the Hoopoe!
It remained in the same area for over an hour until it was harassed by the Meadow pipits and had to fly to the nearby trees to escape them. But would return to it's favoured feeding area soon after. 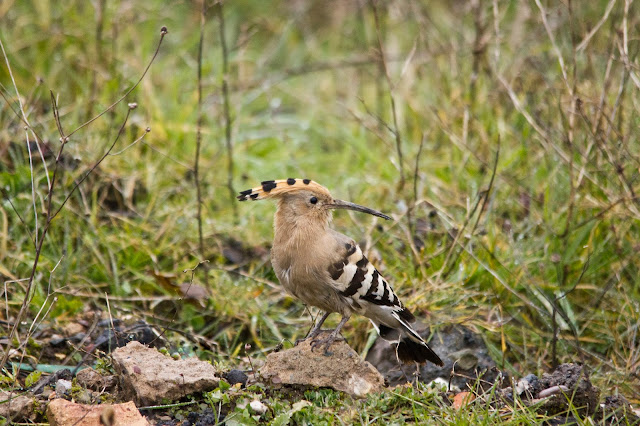 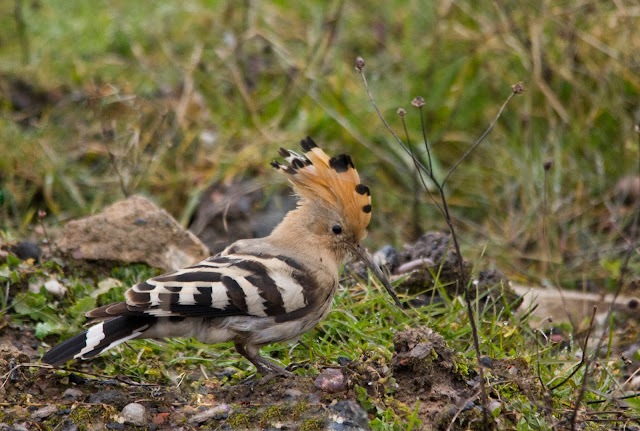 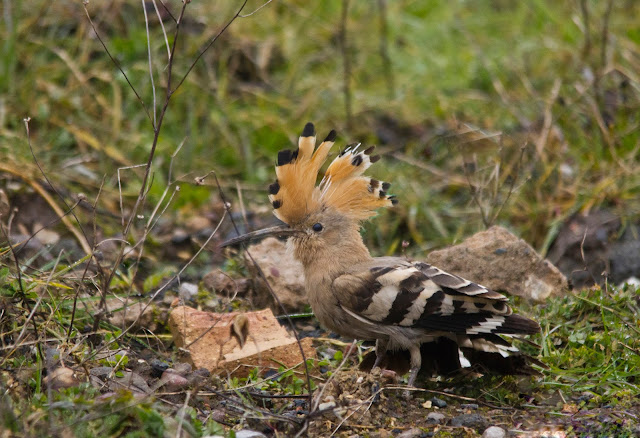 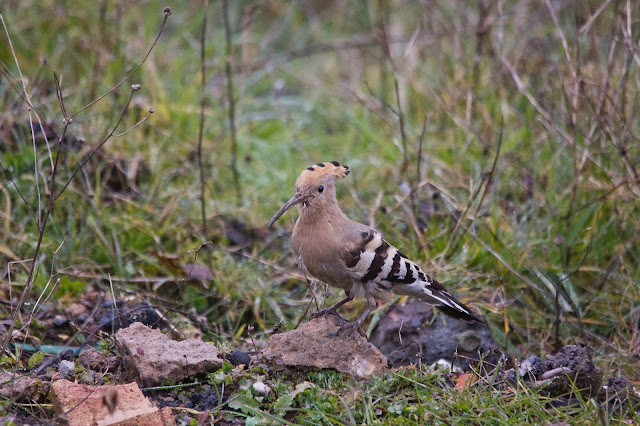 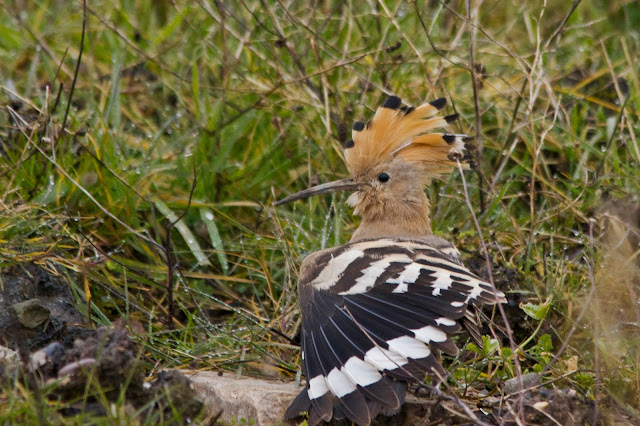 Dudley Cemetery was only 5 miles away, so we stopped off to take a look at the grave of Duncan Edwards, Manchester United footballer who died from injuries sustained in the Munich air crash in 1958.

From here we dropped in at RSPB Nature reserve Sandwell Valley. A small inner-city reserve close to West Bromwich. Click Here to view there web page. A very nice reserve which is probably no more than a mile to walk around and is run by friendly staff and is very well maintained. 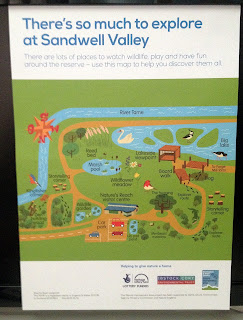 A stop at the feeders right outside the reserve centre quickly added what had been so far this year the elusive Bullfinch to my year list. Having previously not seen one this year I watched eight coming into the feeders and perched in nearby trees. A walk down to the hide was rewarded with an unexpected sighting of a very early Little Ringed Plover. I grabbed a record shot with my phone handheld to the scope. Male Goosander and male and female Goldeneye were also noted along with Grey Wagtail.

Another trip to Norfolk this morning, kicked off with a stop at Blakeney Quay. From within the car the outside temperature was showing 4 degrees. However stepping out of the car the temperature felt well below. that, and with the wind blowing directly into our faces it was freezing. We headed off along the sea wall making our way towards the bend and the National Trust gate. Arriving at the gate the biting wind was soon forgotten when a small flock of Twite flew in to feed close by and these were soon followed by several Lapland Buntings. It was good to spend some time watching these birds at close quarters rather than catching a glimpse of a calling bird as it flew overhead.


From here we headed off towards the shingle banks North of Arnold's Marsh. I decided to scope the pools and shingle from the new shelter along the coastal path, while dad and Brian headed off in search of Snow Bunting. The pools held good numbers of roosting Dunlin along with Redshank, Wigeon, Teal and plenty of Brent Geese. 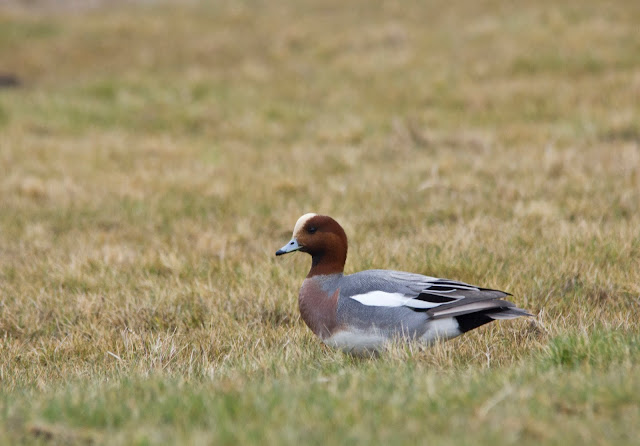 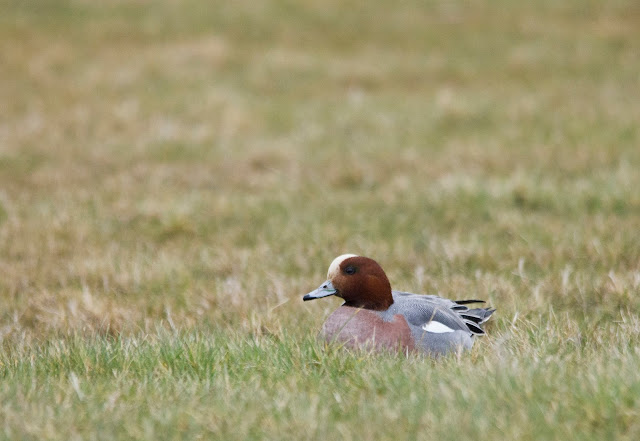 After a fairly long walk along the shingle banks dad and Brian had managed to locate the Snow Bunting flock.  I managed to get reasonable scope views of the birds as they flew around the shingle feeding.

With no sign of the Red-necked Grebe at Brancaster Staithe we headed for Hunstanton Cliffs and quickly found several Fulmar circling around the cliffs to add another year tick before heading for home.
Posted by Jim No comments: