Lesser-Spots, Redpolls and Otters in Norfolk

We began the day at Santon Downham hoping to finally catch up with Woodlark. It had eluded me on the previous visits here this year. This morning I heard the distinctive song having only walked a few steps from the car. Several birds were singing and entertained us with their "parachuting" display flights. At least six birds were seen, with two seen closeby feeding among the stubble.

We Headed through the underpass and followed the path alongside the Little Ouse River. We were delighted to spot two Otters swimming in the river. They followed us all the way downstream until we stopped to search for Lesser-spotted Woodpeckers, leaving them to continue on. 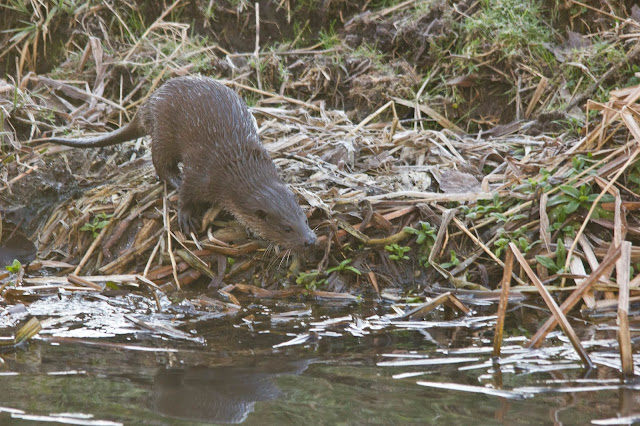 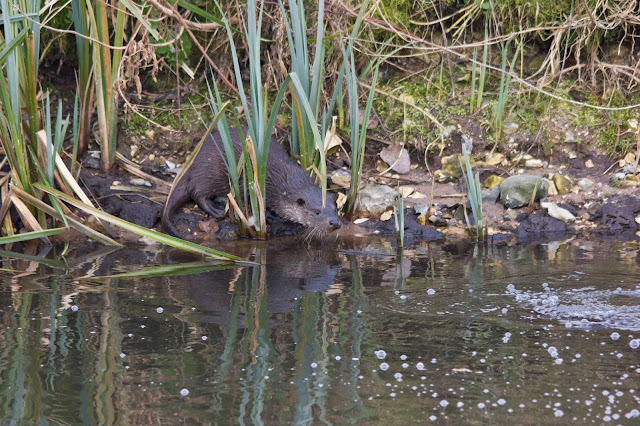 We could hear Lesser-spots drumming and calling quite frequently. Eventually, a pair flew in and the female stayed long enough to give superb views as it searched for food or maybe prospecting for a new nest site?

We left Santon Downham and headed for the Hawk and Owl Trust reserve at Sculthorpe Moor. The reserve has recently been hosting three species of Redpoll. After making a donation we headed for the feeders by the portacabins and began the search. Almost immediately a Lesser and Mealy Redpoll came onto the feeder. However, the Arctic Redpoll was proving to be quite elusive. Most birders were concentrating on the feeders until a lady said she had a very pale bird near the water pool. Thankfully and with some relief this proved to be the Arctic Redpoll! Later we would see it again on the feeders before we headed for Titchwell.

Titchwell was our final stop of the day and it provided some new additions to the year list with Mediterranean Gulls seen on the Freshwater Marsh, Knot and Spotted Redshank on Volunteer Marsh and Great Northern Diver on the sea. At one point we had Great Northern, Black-throated and Red-throated Divers in the same scope view!

Weekday traffic added some extra time to the trip home, but it was another great day's birding.
Posted by Jim No comments:

An early morning visit to Crossness this morning proved very frustrating. Arriving around 7.30am to find much of the site covered in a thick mist. We were hoping to find the Penduline Tit but despite a two-hour search of the area surrounding the dipping pond, there was no sight or sound of it. After crossing the road we began another search of the reedbeds in front of the viewing screen but again failed to find the target. Several Bearded Tits were present and showed extremely well right in front of us. After another hour or so we decided to admit defeat.


Heading further South along the M25 we eventually arrived at Mercers Country Park in Redhill Surrey. A Black-throated Diver had taken up residence on the lake here since the 3rd of February. The main gate to the park was locked upon arrival! apparently, the Aqua Sports Company that operates from here is not open on a Friday in January and February thus the gate to the car park is locked. After finding a side street to park in we entered via a pedestrian pathway and began scanning the lake. The sides of the lake were bordered by trees on each side and this made scanning the lake difficult. It was a case of finding an opening through the trees, scanning the lake and then moving on to the next opening and scanning again. Eventually, the Black-throated Diver was found in the middle of the lake. I managed a record shot through the scope before we headed for home.

The weather forecast this morning was looking perfect for some Goshawk action. On route, we dropped into Lackford lakes hoping to connect with the Kumlien's Gull. Unfortunately, our timing was off and most of the gulls had already left the roost to feed in the surrounding fields. 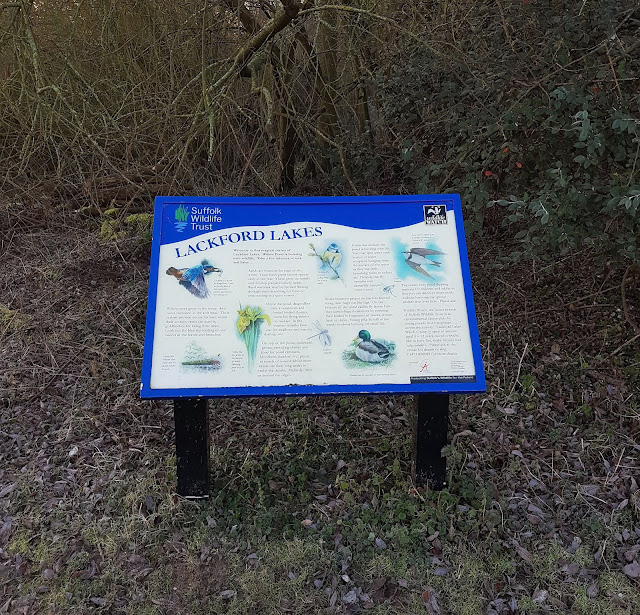 We headed North East along the A134 and stopped at the BTO's Nunnery Lakes reserve. We walked through the white gate at the side of the offices along Nunnery Place and onto the reserve. A scan from the bridge overlooking the 2nd lake failed to locate the Jack Snipe we were hoping for, but scanning from the bank by the fisherman's car park we managed to find not one but two Jack Snipe!


It was now mid-morning and time to search for Goshawks. We headed for Cockley Cley and parked up at a suitable spot. It didn't take long before the first Goshawk appeared above the distant tree line. Soon a second bird joined the first and we watched them displaying. The weather was perfect and we counted nine Buzzards in the sky at one time. We also had scope views of one of the Goshawks perched in a distant tree. Eventually, the Goshawks disappeared and we moved on in search of Willow Tits. We walked the track for nearly a mile, only finding one likely looking candidate in the tree tops. But as the location holds both Willow and Marsh Tits we could not be sure. As we returned along the track luck was with us when the distinctive call of a Willow Tit rang out from within the trees.

At Santon Downham we again failed to find any Woodlark but watched another Goshawk above the trees along with a Sparrowhawk and a Kestrel.

Before heading for home we returned to Lackford lakes and our luck was in. Large numbers of gulls were already on the lake and more were returning every minute. A 2nd winter Yellow-legged Gull was found and then two Caspian Gulls. The Kumlien's Gull had not been reported the previous evening but it had returned this evening and we enjoyed good scope views before leaving.
Posted by Jim No comments:

While birding up in Lincolnshire yesterday news broke of a Ferruginous Duck found on my local patch Lee Valley! It was too late in the day to visit yesterday on our return so Brian went looking this morning. After an hour or so he managed to locate the duck. I didn't make the trip until 11.30am but luckily Brian still had the duck in sight. It favoured the tangled overhanging branches of one of the small islands for the majority of our visit but did emerge on occasions to give clearer views. 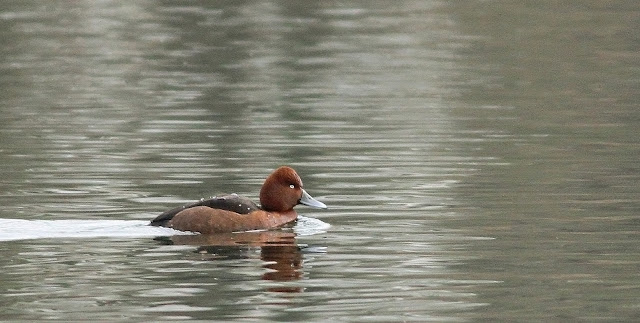 The long-staying Long-billed Dowitcher at Frampton Marsh was the main target today. On route, we dropped in at Deeping Lakes hoping to connect with the regular roost of Long-eared owls. Visibility had not been good on the way up and it had not improved as we pulled into the car park at Deeping. The island in front of the hide was shrouded in a heavy mist which made locating the owls among the tangled branches impossible. We decided to walk the circuit along the river and return when the mist had cleared. Several Goldeneye and Goosander were seen on the main lake and a female Bullfinch was a welcome addition to the year list. Thankfully on our return, the mist had cleared sufficiently for the island to be scanned and we managed to locate at least three Long-eared Owls.


Twenty-six miles further up the A16 was Frampton Marsh which was the next destination. We were met by friendly staff and after a quick chat I collected a map and headed off towards the old car park. Once again it was grey and heavy cloud overhead, but luck was with us because as we approached the car park LGRE and his group had the Long-billed Dowitcher in view. I had been expecting a lengthy scan of the area to locate the Dowitcher but it was feeding on the wet grassland relatively close to our location. Large numbers of Ruff were seen along with smaller numbers of Dunlin. Numbers of Pintail were very impressive, far exceeding my previous highest counts

It was my first visit to Deeping Lakes and Frampton Marsh and I was very impressed with both reserves. Unfortunately, the heavy mist at both locations prevented a full exploration of the sites but I'm sure there will be return trips to both.
Posted by Jim No comments:

Santon Downham is the destination this morning, arriving around 8.30am we park in the car park just north of the railway crossing and head towards the underpass. At first, there is no sign of the Great Grey Shrike. But after walking a further 100 yards along the track the shrike is found sitting near the top of a Hawthorn. The weather began to close in and soon the snow began to fall. It gets heavier as we walk the river path towards the picnic site. A Kingfisher is seen along the river and several Brambling are seen among the leaf litter,  feeding close to the railway lines. 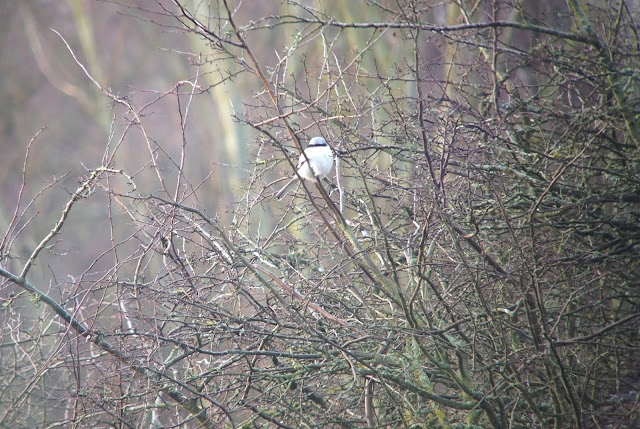 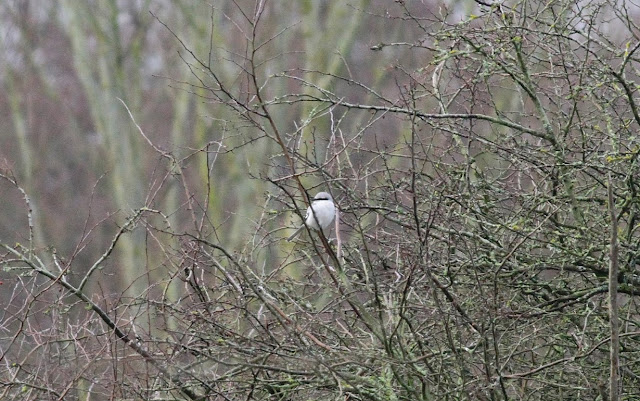 A visit to Lakenheath on the way home added a Bittern to the year list as it flew across the reeds from Joist Fen and a Water Rail made a brief flight across the pool in front of the viewpoint. Marsh Harriers were seen hunting the large reedbeds and a large herd of Whooper Swans were seen in the surrounding fields from the river bank.
Posted by Jim No comments: