A later than usual call from Brian, saw us starting the 120 mile trip to Caister-on-Sea around 8am rather than the usual start time of 5am!
After a couple of hours we pulled up in the car park by the lifeboat station and headed off into the dunes away from the fence line as directed by the news services. Although the bird wasn't showing when we arrived it was said to be feeding up and down the fence line among the brambles and gorse.
Soon after arriving Brian picked the bird up in flight heading our way, and it promptly landed on the wire fence bordering the golf course and dunes, allowing for a few record shots and some good scope views. For the next two hours it seemed to follow the same feeding pattern. It would fly along the gorse to a favoured patch of bramble and fly back and forth after insects. Only moving from the bramble when flushed by golfers walking along the fairway close by.


Holland Haven was a nice stop off on the return journey. As we approached the sea front a Short-eared Owl appeared along the hedge line hunting the surrounding fields. It quickly became apparent that there were several SEO's in the area! 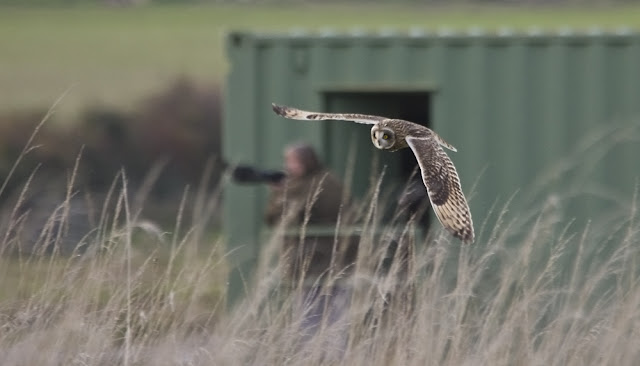 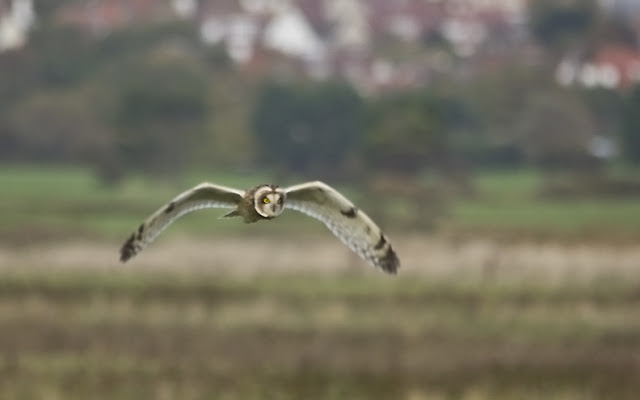 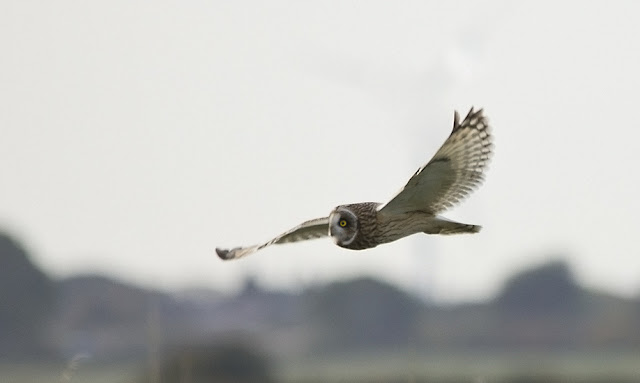 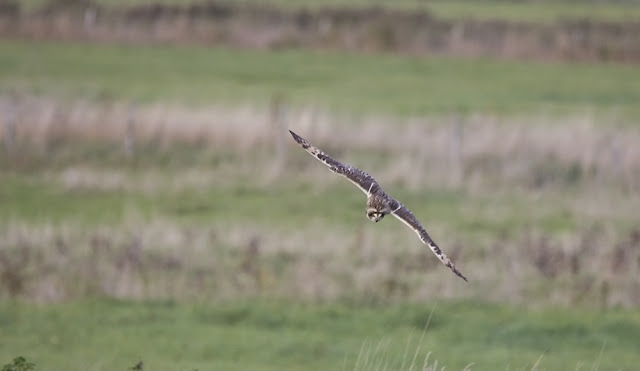 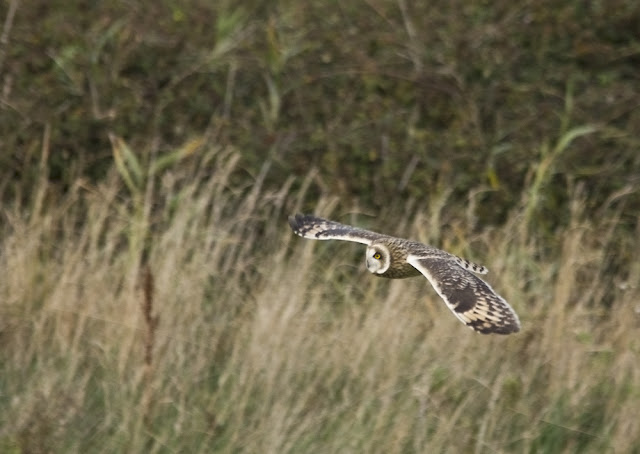 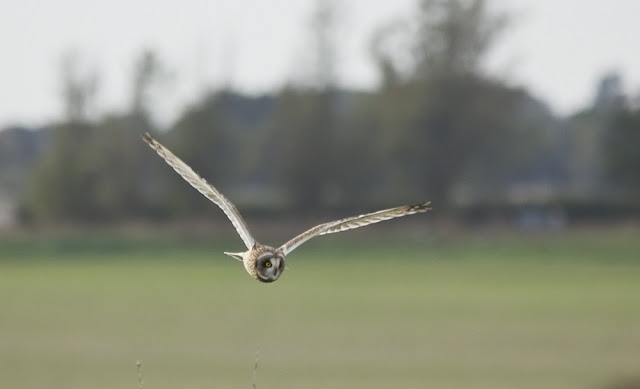 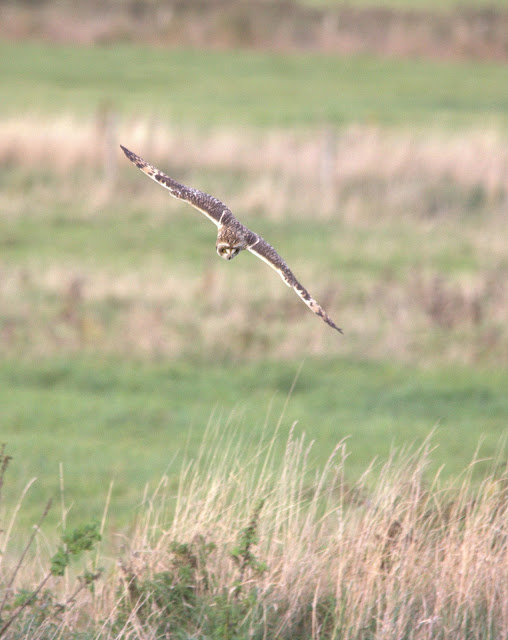 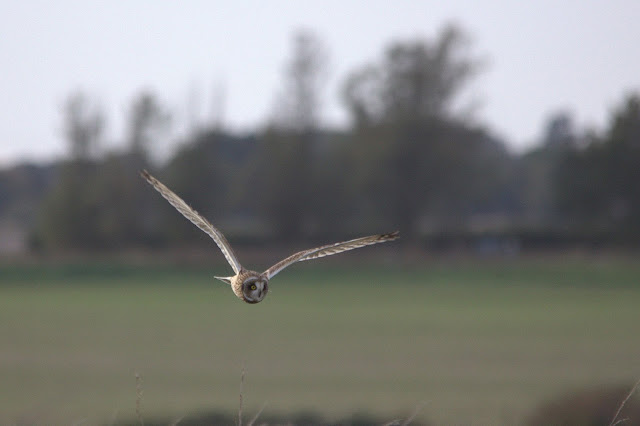 Unfortunately the Rough-legged Buzzard had just been flushed by one of the SEO's and had flown to the nearby golf course, landing in a bramble bush between two fairways.
I grabbed a very poor and distant record shot of the view I had through the scope with a hand held phone.


If the bird over winters then I'm sure there will be a return trip.
Posted by Jim No comments:

News broke of the presence of a Jack Snipe at Rye Meads RSPB reserve today.
Being only 15 miles from home it was an easy decision to jump in the car and head for Rye Meads. Thirty minutes later we are parked up in the car park and heading for the reserve centre.
Greeted by a friendly member of staff and given a map we are soon walking along the reserve path heading for Ashby Hide.
A scan of the surrounding reeds and pools failed to locate the bird, but movement close by within the muddy pools in front of the hide found the bird much closer than I was expecting.
I even managed a few shots of the bird as it emerged from behind the vegetation! 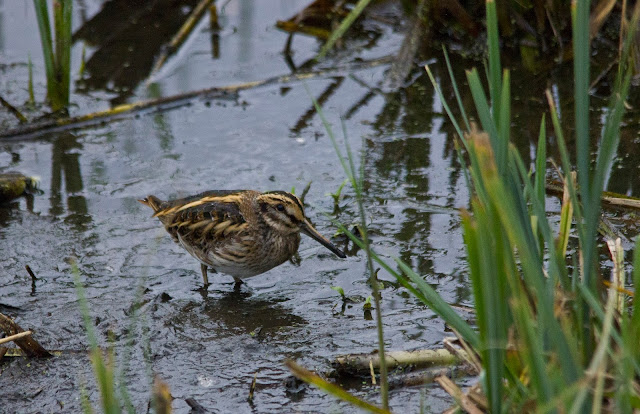 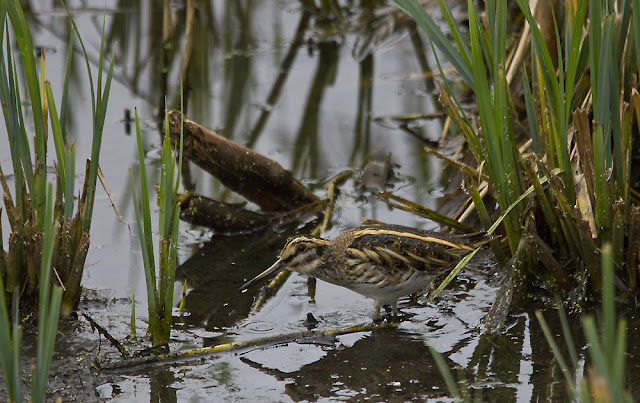 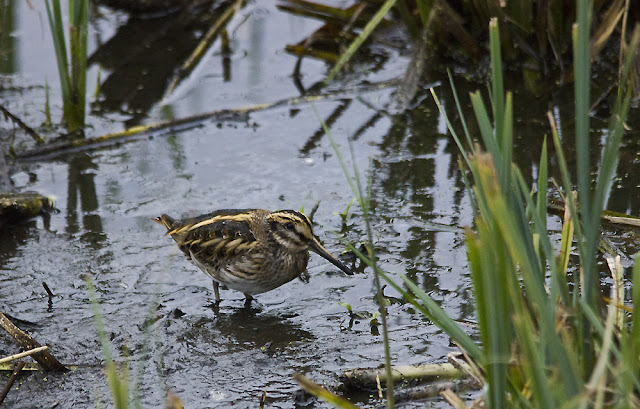 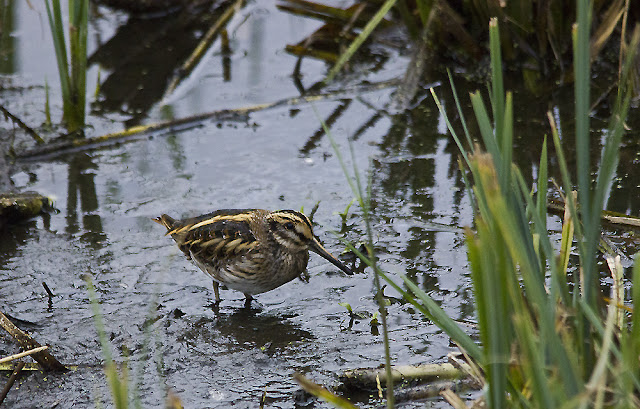 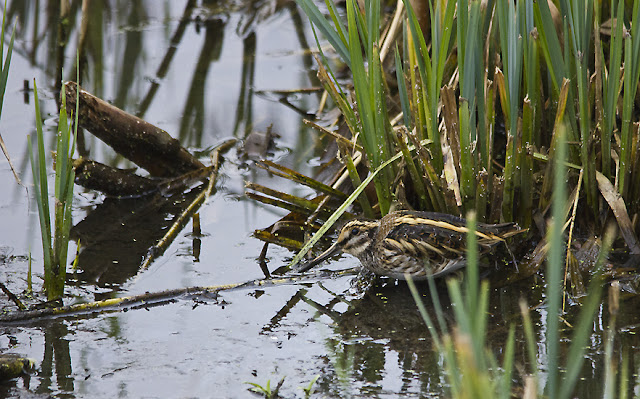 Having encountered a few dense fog patches where visibility was down to just a few metres, we still arrived at Wells beach car park around 7.15 having left Essex two hours earlier.
Barn Owls were again seen on route among which was a brief encounter with one perched on a roadside sign.
Having headed off along the main track we began scanning and listening for any signs of the Blyth's,  but could only find Goldcrests, Blackcaps, Blue and Great Tits with large numbers of Redwings flying over.
Further along the track another birder informs us he has just heard the Blyth's close to the old toilet block! Having doubled back we began the search along with a small group of birders, but after 30 minutes and with time short we moved on towards the "Drinking Pool" hoping to connect with the Red-flanked Bluetail. A Short scan after arriving and the Bluetail is spotted feeding low down at the base of a Beech tree. A cracking bird and it's finally on the life list!


Heading off along the track we failed to locate the Great Grey Shrike that had been reported by the metal gate, after joining a growing group of birders looking for the Hume's Leaf warbler we heard it call and soon after it flew across the track calling. Another year tick was added when a Yellow-browed warbler was found close by.
On the return walk to the car park we had another search for the Blyth's and got lucky when another birder put us on to it high among the branches!

Leaving Wells we headed for Muckleburgh Hill in search of the Olive-backed Pipit. Having taken the right hand path we reached the top of the hill and joined the assembled birders already present. The OBP showed almost immediately feeding among the bracken. 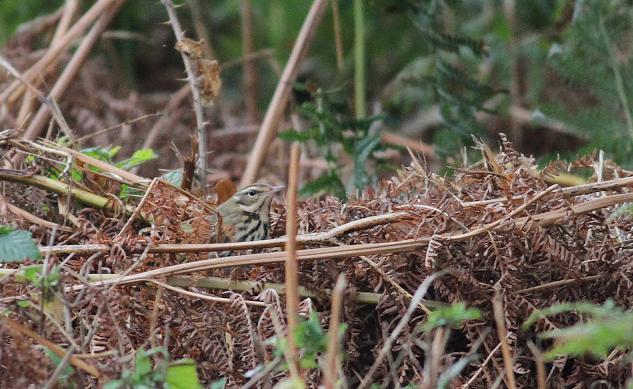 With time short we made our way to Beeston Regis and found the Isabelline Shrike perched up in a nearby Hawthorn bush. We had already connected with it the previous weekend but it was well worth a second visit.

Before leaving we managed to add a Long-eared Owl to the year list, when it was flushed by the local Magpies. It circled twice and tried to land in a large Oak tree by the roadside, before flying across the road and heading into the trees nearby.

A great end to another super day's birding in Norfolk!
Posted by Jim 1 comment:

A Barn Owl perched on a roadside fence post on route to Norfolk was a great start to the day, In the semi darkness we pulled over to take advantage before heading off to Titchwell for a day's birding.
Before reaching Titchwell car park a Little Owl perched on top of a telegraph pole is also seen along with large numbers of Red-legged Partridge in the surrounding fields.
At Titchwell a walk from the car park to the beach produced good sightings of Marsh Harriers, Golden, and Grey plovers, Curlew Sandpiper, Snipe, Eider, Common Scoter, Sanderling and Razorbill along with several skeins of Brent geese. 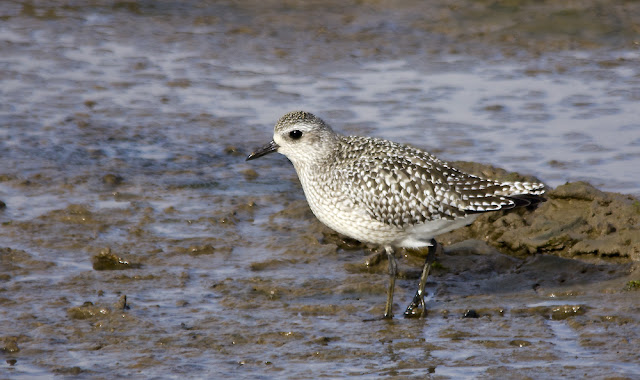 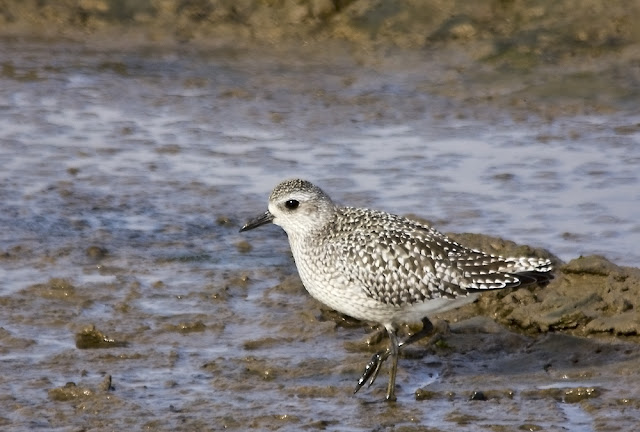 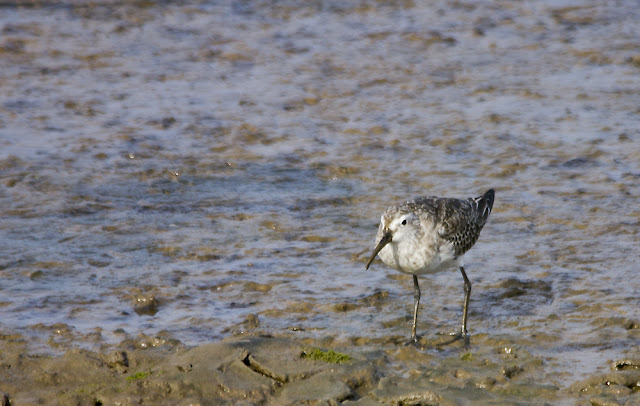 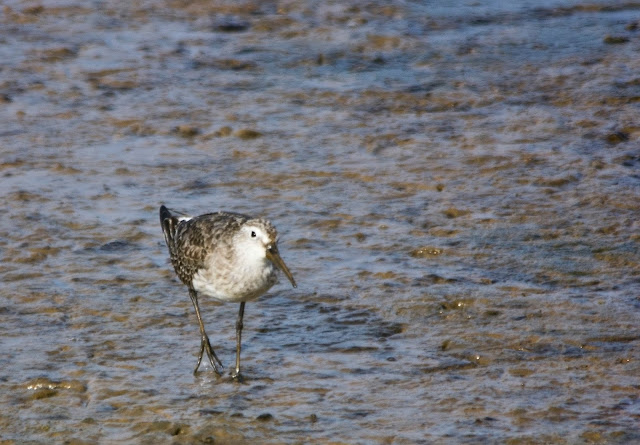 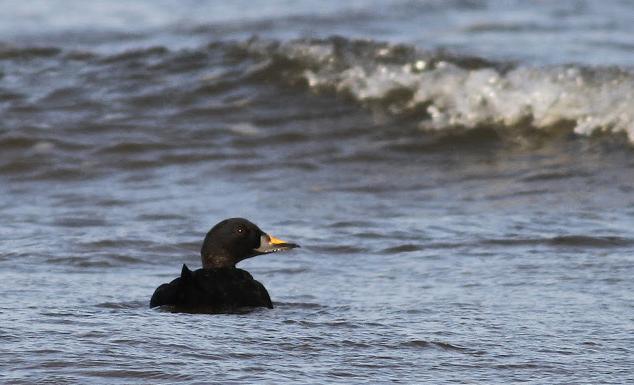 On the return walk we had a brief search for the previous days reported Yellow-browed Warbler but failed to find it among the tit flocks.

While enjoying views of Turnstones, Ringed plovers and Dunlin at a brief stop at Brancaster the pager bleeps into life to report a Radde's warbler at Holkham Pines. 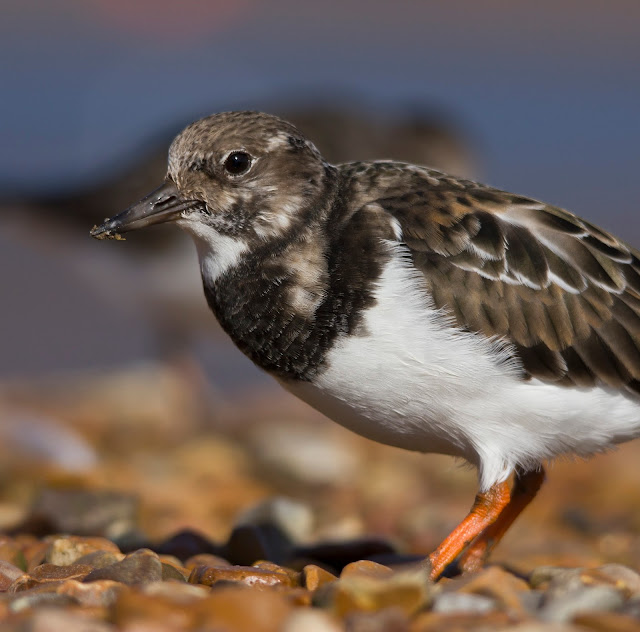 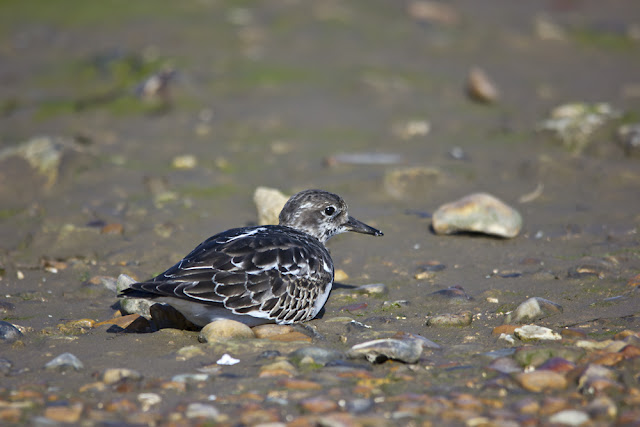 Having parked up and headed off along the track towards the dunes the pager reports the presence of an Isabelline Shrike at Beeston Regis! Already half way along the track we decide to turn around and go for the Shrike. Arriving at Beeston and after a very short walk from the car we found the Shrike perched up in a Hawthorn Bush immediately!

There were plenty of local birders already present when we arrived and after an hour of watching the Shrike news filtered around that there had been a Pallas's Warbler found nearby at Sheringham.
After some confusing information as to the exact location of the bird, we parked up and found the bird showing superbly along the edge of the golf course and railway tracks in the company of Goldcrests.

Not a bad ending to another great days birding in Norfolk.

Having seen news that the Ring-necked Duck was still present yesterday evening, we decided to make the trip today. Forty two miles and a little over an hour after leaving home we were parked up along the B489 and heading up the steps to Startop's End Reservoir.
The forecast had predicted heavy showers and sunny intervals for the morning, Stopping and scanning at regular intervals we had failed to find the target! then half way towards the hide the heavens opened and by the time I had made it to the hide I was soaked.
The soaking was quickly forgotten though when the Ring-necked appeared among a small group of Tufted's in the Eastern corner.
The rain eased off briefly allowing some nice scope views and a few records shots before returning with even more force soon afterwards.
Large numbers of  Common Pochard we seen and at least two female Red-crested Pochards were found among them.
While heading back heavy rain started to fall again and a second drenching followed before we made it back to the safety of the car.
Despite the soakings the Ring-necked had made it a very worth while trip. 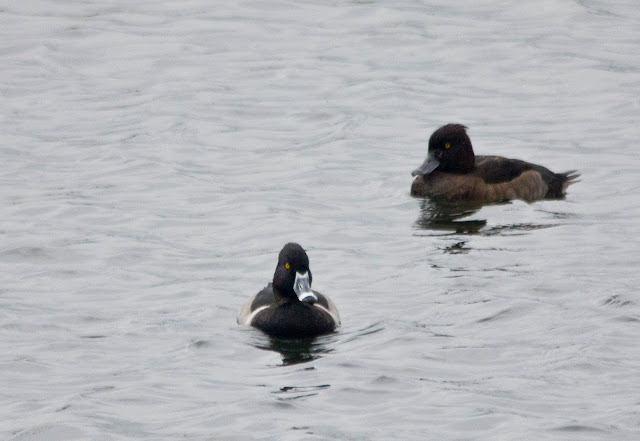 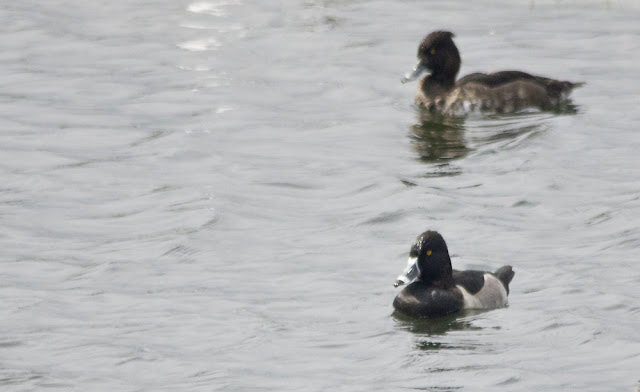 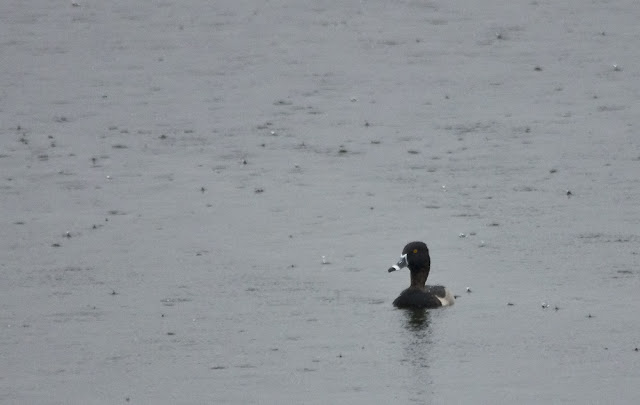