A productive days Birding in Kent and East Sussex

This morning we had our sights set on a couple of Kent targets. We headed South-East and stopped at Stodmarsh NNR. Upon entering Reedbed Hide there was plenty of Greylag Geese present, but the hoped-for Bean Geese were not among them. A Water Rail close to the hide entertained us and then geese began flying overhead, probably having roosted at nearby Grove Ferry. Several small groups of Greylags flew past and then the two Bean Geese were spotted. They didn't land on the reserve but carried on past us. We left the hide thinking that they may have landed on one of the fields along the entrance track, and sure enough, after a quick scan of the numerous Greylags, we located the Bean Geese among them.

Leaving Stodmarsh we headed for Dungeness, with our target here being a juvenile Sabine's Gull. The bird had already been reported earlier in the morning, so we were quite optimistic as we walked along the path bordering the power station. We met a local and were told it was showing well, but as we reached the gathered group outside the hide the bird was nowhere to be seen! Luckily Brian picked it up coming back in from the direction of the fishing boats and I was on it straight away. It made several flights and then settled on the water. 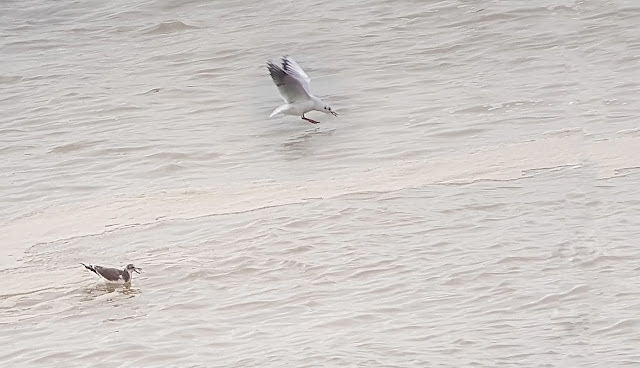 With both target birds seen, we decided to visit Cuckmere Haven in East Sussex in search of a Grey Phalarope. After receiving some directions from a local we parked up in Seven Sisters Country park and headed along the riverside path. After a walk of some three-quarters of a mile, we arrived at the flooded field it had been favouring. 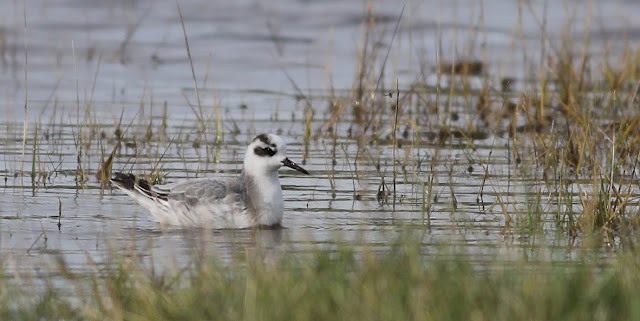 This tiny little wader normally spends the majority of the year out at sea, only coming to land to breed. Breeding in places like Northern Siberia, Canada, and Greenland. Its migration route takes them past Britain but it's normally well out to sea. Heavy storms can sometimes drive the  birds off course and they can then get pushed inland allowing us superb close views.
Posted by Jim No comments:

News reports of a Bobolink being found at Theddlethorpe in Lincolnshire yesterday afternoon had us checking maps, directions and times involved. Unfortunately with the distance involved, we would have arrived on-site sometime after 6pm and therefore in darkness.

The forecast for yesterday evening was for clear skies so we knew before setting off this morning that there was a good chance the bird would have moved on, but we decided to make the trip anyway. We arrived shortly after first light and walked to the dunes to join a hundred or so other hopeful birders already searching for the bird. A Short-eared Owl flew up from within an enclosed area as we walked the dunes and Skylarks, Meadow Pipits and Reed Buntings were flitting about in the long grass. We walked up and down the dunes, but there was no sign of the Bobolink. By late morning we conceded defeat and headed back to the car and heard a Yellow-browed Warbler calling in Willows close by.

We headed South towards home but made a detour to Rutland Water on route hoping to connect with a Lesser Scaup. The bird had been present since the 10th but had been quite mobile, visiting several of the water bodies on the reserve during its stay. During the morning we had news that it was on Lagoon 1, which is the Lagoon viewable from upstairs in the visitor centre. After several scans, Brian picked the bird out drifting along behind the long island at the back of the Lagoon, unfortunately before I could view it, it tucked itself under the bank and was not visible. I kept scanning hoping it would re-appear from behind the island and eventually after quite a wait it did! Relieved we headed for the car, stopping to view a Yellow-browed Warbler flitting about in trees right ouside the visitor centre.
Posted by Jim No comments:

This morning we headed for Titchwell, a male Hooded Merganser had been seen the previous day and we were hoping it had stayed overnight. The rain was already quite heavy as we left the car park and after scanning Patty's Pool we could find no sign of the Merganser. The walk back along the boardwalk did, however, produce a Yellow-browed Warbler opposite Fen Hide to add to my year list. We returned to the main path and headed towards the beach thinking we might walk to Thornham Point and check for the Grey Phalarope, but the rain became heavier to the point where all I was doing was constantly cleaning my bins and glasses, and when news came through that the Red-eyed Vireo was still present in Easington East Yorkshire we decided to head North.

We were 144 miles away and road closures along the route meant a slow journey northwards. We arrived around 1.30pm and within minutes we were staring at the Red-eyed Vireo and the frustrations of the journey north were quickly forgotten. The bird seemed to follow a pattern and would seemingly visit a Dogwood bush every 30 minutes or so. While waiting for the bird to return I had some nice views of another Yellow-browed Warbler and also a Pied Flycatcher. A very welcome addition to the year list, having thought I had missed my chance of seeing one this year after somehow missing them 3-4 times at sites closer to home. 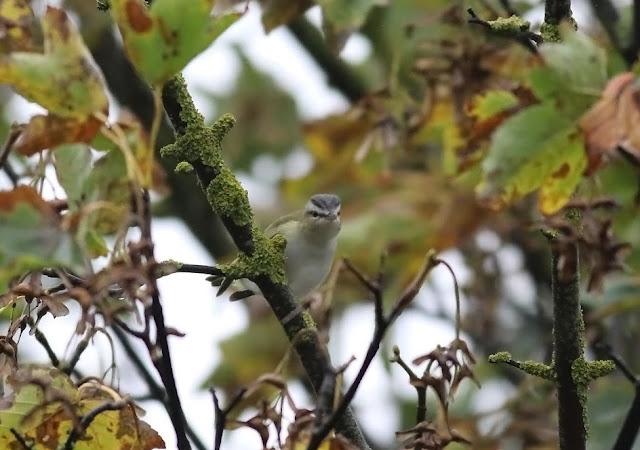 With a four hour journey home ahead of us, we were thinking of making a move when news started filtering through on the local's walkie talkies of a possible Great Snipe at Kilnsea. Shortly afterward the bird was confirmed as a Great Snipe! Queue the mass exodus from Easington and a line of cars heading for Kilnsea. After walking along Beacon Lane and continuing along the muddy track we were eventually met by a group of birders who had blocked the footpath all trying to get a glimpse of the Snipe. The bird was resting at the very edge of the footpath and with the birders blocking access to the footpath it meant that it stopped anyone walking the footpath and flushing the bird. We cut through the gap in the hedge and after a bit of ducking and diving managed to find a gap in the growing line of birders and get the scope trained on the Snipe!

Great Snipe breed in Scandinavia, east through the Baltic states, Poland and Western Russia and winter in sub-Saharan Africa.

A day that started with us getting a good soaking at Titchwell ended with 2 additions to my life list and four year ticks!

As Brian kept reminding dad today "If you get out there you might just see something" It certainly paid off today. It also helps to be in the right place at the right time.