Having checked the weather forecast the previous evening, we decided Suffolk offered us the best chance to avoid the heaviest of the rain. At Minsmere we headed for North Hide and after a lengthy scan, we finally managed to locate two Jack Snipe having seen several Common Snipe previously. East and South Scrapes held high numbers of Med Gulls and two redhead Smew were found tucked away in the South corner. Apart from the usual species a single Knot and three Dunlin were the only other birds of note.
Chiffchaffs and Goldcrests were seen in the scrub around the sluice. I could hear a Firecrest singing close by but failed to locate it after a brief search.

A short stop off at Eastbridge produced sightings of the long staying Glossy Ibis. First reported on the 19th January it was still feeding on the flooded area near the bridge but remained distant today.

Being relatively close to Hazelwood we dropped in for another look at the Coues's Arctic Redpoll. It wasn't showing on arrival but appeared shortly afterwards feeding within the Lesser Redpoll flock on the recently sown onion field. This was our fourth visit and the bird was still following the same pattern of our first visit. Feeding in the field then flying back into the bushes near the path. 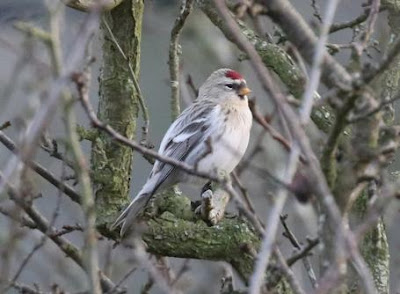 The last stop was at Landguard hoping to locate a Purple Sandpiper for a year tick. Having walked the length of the beach from the cafe we found two birds feeding close to the boardwalk. With the high tide, the birds were forced to feed close in. 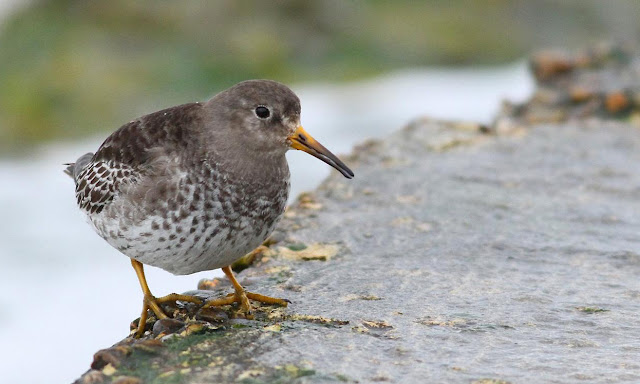 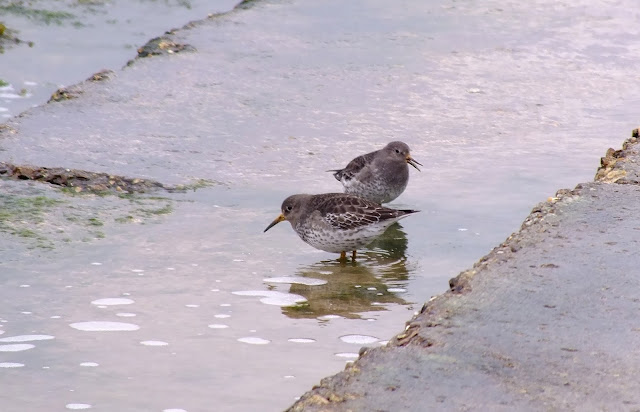 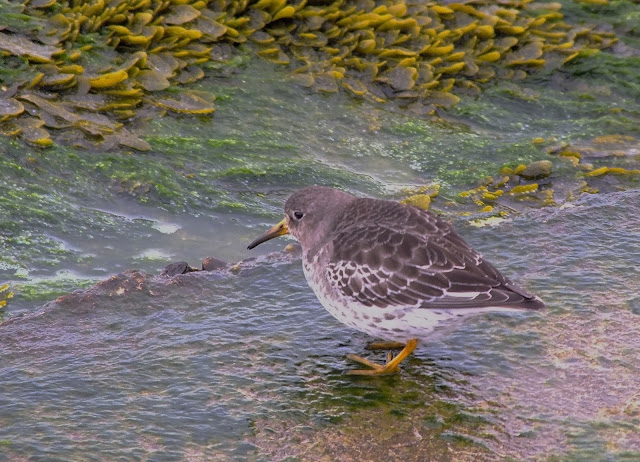 A decent days birding, but hardly any newly arrived migrants seen.
Posted by Jim No comments:

Having missed the local Bluethroat on Friday, we visited Dungeness this morning hoping that bird would stick around for at least another day. Unfortunately, after 3-4 hours of searching, it failed to appear.
The gorse bushes lining the gully were alive with Firecrests. Having heard several birds singing they began to show themselves among the gorse perching out in the open. A few newly arrived Chiffchaffs were also seen among the gorse for another year tick. Two Stonechats and several Linnets and Meadow Pipits were also seen. A calling peregrine was heard and then seen flying overhead and a Raven also flew overhead heading towards the pylons close to the power station. 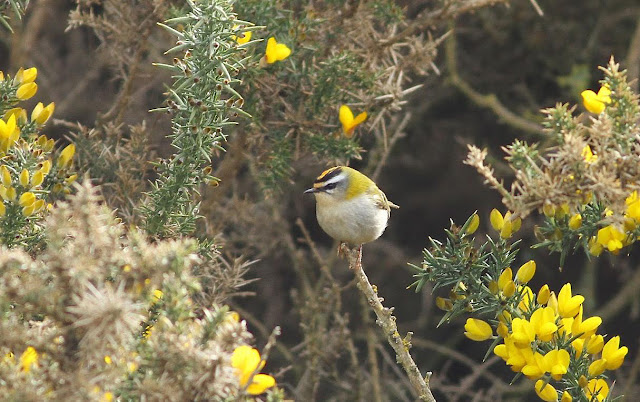 A search of the lighthouse garden revealed even more Firecrests and two Black Redstarts were found among the power station compound.

A brief visit along the track at Elmley produced sightings of Marsh Harrier, Redshank, Lapwing, Curlew, Linnet. Red-legged Partridge and a single Dunlin. A pair of Peregrine caused chaos as they hunted the area.
Posted by Jim No comments:

Mid-morning on Saturday and with the Snowy Owl already re-located at Thornham, Brian is keen to make the trip. It would be a lifer for dad but he already has alternative plans and is unable to go, so the trip is delayed until today.
Leaving at 5am the plan is to put ourselves in the area and hope it's re-found at some point during the day. Arriving around 7am our first stop was to Hunstanton Cliffs to tick Fulmar before moving onto Thornham harbour. After a lengthy scan, and with several dogs running about on the beach it wasn't a surprise that there was no sign of the owl.
A brief stop around the drying barns at Choseley produced my first Yellowhammer of the year before we moved on to Titchwell. Several Med Gulls were present on the Freshwater Marsh for another addition to the year list and from the beach we enjoyed good views of Red-breasted merganser, Scaup and Long-tailed Ducks. Then as we were scanning the channels for any Red-Crested Pochard news broke of the Snowy Owls presence at Snettisham!
A quick dash back to the car and we are soon parked up in the car park at Snettisham Two miles and 35-40 minutes later we reach the Southern end of the reserve. Sitting on a grass mound in a fenced off area behind Shore Hide is the fantastic sight of the 1st winter female Snowy Owl some 80 metres away! It remained there throughout our visit, sometimes dozing but always aware of its surroundings.

The Snowy Owl had found the perfect spot to rest up, surrounded by a fence with a boardwalk running right along one edge that allowed superb views for all without any disturbance to the bird. There was no hint of anyone trying to cross the fence or encroach closer while we were there.
The RSPB volunteer on site has to be congratulated for the way he handled several dog owners with free running dogs. Respectfully pointing out the situation and asking them to put leads on their dogs. All did so without any problems. 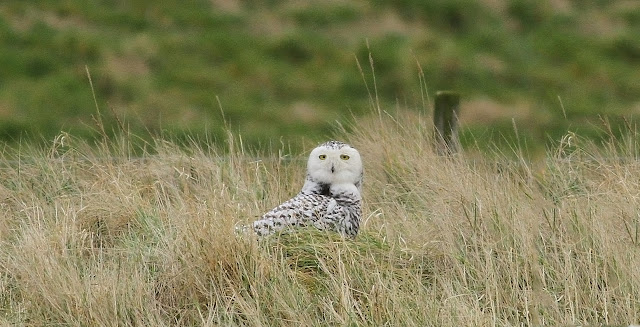 Some handheld phone scope images below. 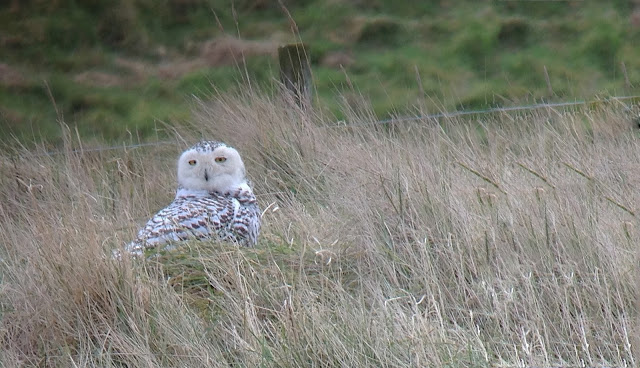 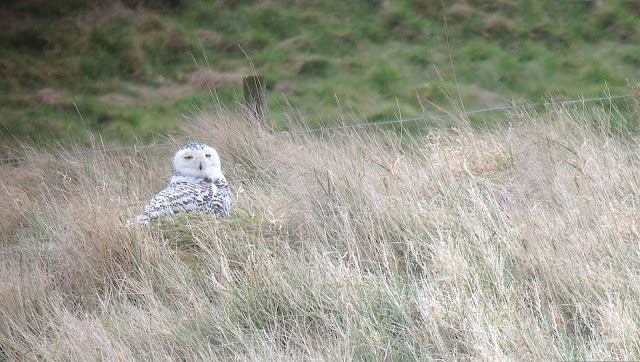