Morning start at Holland Haven today.
There had been reports of 1-2 Long-eared Owls roosting at this site throughout much of last week.
On arrival we meet one of the regular patch workers, who gives us some good directions as to where we should be looking for the L.E.O.
After a good scan of the bushes there's no owl to be found. A good view of the resident Little Owl in it's usual tree is a consolation as is a Lesser Redpoll feeding close by on thistle heads.
A Sparrowhawk puts the pigeons up and gives good views as it flies overhead. The bushes around this area hold large numbers of Blackbirds. They seem to be everywhere I look. A Green Woodpecker lands on a telegraph pole and a Great Spotted Woodpecker flies across heading for nearby trees. Redwings and Fieldfares are seen in good numbers.
Further along the track a Goldcrest is seen and then a Grey Wagtail is seen on the roof of one of the containers.

From here it's off to Languard and a wander along the perimeter of the observatory.
As with Holland Haven large numbers of Blackbirds are seen. The ringing teams must have been kept busy just with this species being caught.
A Firecrest is found in the trees above the mist nets,  There's a Goldcrest seen in the beach side bushes and then dad calls me over to have a look at a bird he's found.
It's quickly found to be a Waxwing and dad is not only happy to have found it but also to add it to his year list.
I also need it for the year, having missed this species at the start of the year. It's a single bird and it's busy feeding on blackberries.
Dad is the only one who had braved taking the camera with him in the constant drizzly rain, so he tries to get a record shot of the bird (one of which is on the right), while myself and Brian head for the comfort of the car.

Spent a very nice and relaxing few  hours at Dungeness today.
Started off at the observatory and a wander round the moat area. Plenty of Chiffchaffs seen around this area and a handful of Goldcrests among them.
A Firecrest pops up right in front of dad as he tries to take some photos of the Chiffchaffs. It gives good but brief views.
There's large numbers of Swallows overhead with smaller numbers of House Martins also seen.
Brian having returned from his brief sea watch picks up a female Ring Ouzel in the trapping area, after receiving his phone call we quickly join him and get great views as it sits up on one of the small bushes.
A check of the lighthouse gardens area reveals a female Black Redstart, and the Glaucous Gull is quickly spotted among a small group of Herring, Great Black-backed and lesser Black-backed Gulls. Theres also a Yellow-legged Gull found within this group.
ARC pit is the next stop and Brian finds a Little Stint feeding on one of the small islands, There's large numbers of Golden Plovers and Lapwings present and a female Goldeneye and an eclipse Pintail are spotted.
Crossing the road and heading towards the reserve , We stop to view a feeding party of Tree Sparrows, which is briefly interrupted when a Sparrowhawk tries it's luck at taking one of them.
A Marsh Harrier is seen quartering the fields and is added to the day list.
Reaching the reserve we don't take long to pick up one of the three Great White Egrets reported from here.


After it initially takes off and lands on a distant island, it returns quickly to give great views.
Posted by Jim No comments:

A morning visit to Kent today, and first stop is Elmley Marshes.
Pulling off the road and making our way along the track, we flush a female Marsh harrier from the grass quite close to the car. 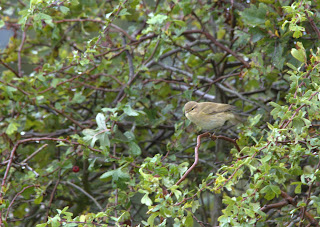 Scanning the fence posts as we head towards the car park, produces a very smart looking Merlin. We watch it until it takes flight and heads low and fast away to the West.
We reach the car park and head off down the track, past the gate to the orchard area. Here I spend the next hour trying to locate the Long-eared owl that was showing well the previous week.
But after scanning every tree, bush and any other piece of likely looking habitat I have to admit defeat and head back to the car park with only 20+ Curlews to show for it.
A scan of the fields behind the toilet block produces plenty of Golden Plovers, Lapwing, Canada and Greylag Geese, along with good numbers of Teal and a single Wigeon is found.
A further scan picks out another Merlin and shortly afterwards it's joined by a second bird.

A brief break in the cloud and a spell of brighter weather sees House Martins appear in big numbers. There's also 4-5 Chiffchaffs feeding in the nearby bushes.

Heading back down the track we flush a Kestrel and then a Marsh harrier from the grass close by.Two Buzzards are seen perched on fence posts, the first is a Common Buzzard, with  the other bird looking more interesting and a good candidate for Rough-Legged.
At the end of the track, we spot a large bird perched on a telegraph pole. First thoughts are it's another  Buzzard, but with bins now trained on the bird we are surprised to find it's a Harris Hawk.
Even though it's an escape, it's still a cracking bird and we watch it for 15-20 minutes before it is mobbed  by a Kestrel.
It decides to head further out into the fields and takes off and then lands on a fence post. Shortly afterwards it takes off again and heads low along the ditch and is lost to view.

From here we head for Capel Fleet and Harty Marshes. There's good numbers of Red-legged Partridge seen in the surrounding fields, but there was to be quite a few less after having reached Capel Fleet we watched a shoot taking place on the top fields, where plenty of birds were being flushed and then blasted out of the air. 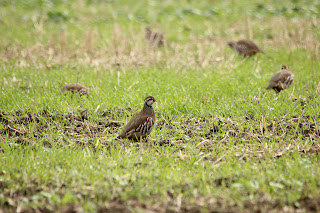 At Harty Marshes we watch another three Marsh harriers and a single Buzzard scanning the surrounding area for a meal. There's also large numbers of Knot and Golden Plover present along the waters edge. 50+ Shelduck take to the air and numerous Little Egrets are also counted.

The weather stays the same for much of the time, being grey and overcast with short brighter sunny intervals.