A surprise call from brian this morning saw us heading for Bramfield in Hertfordshire and a visit to St Andrew church. We arrived to find a single photographer on-site. We joined him and it wasn't long before the first Hawfinch flew in. We managed to see a maximum of six birds while there and they all favoured the taller bare trees behind the Yew trees in the church grounds. When they did drop down into the yews it always seemed to be into deep cover.

There was plenty of activity among the Yew trees with Redwing, Fieldfare, Song Thrush, Mistle Thrush, Greenfinch, Nuthatch, and Goldcrest all seen feeding among the branches.

A day's birding in Kent started with a visit to Dungeness, arriving at the beach for a seawatch at first light. We were greeted with thousands of Cormorants on the sea. Gannets were present as were large numbers of Razorbills with much smaller numbers of Guillemots among them and Several Red-throated Divers were seen moving along the coast. At "The Patch" we found a 1st winter Little Gull among the numerous commoner gull species. Many of the Razorbills seen earlier flew in and landed on the sea a short distance from the gulls. On the walk back to the car we found a pair of Black Redstarts within the power station compound and a Raven was perched on the power station roof.

A brief visit to the viewing screen overlooking Arc Pit failed to locate the Smew, but we added Bearded Tit to the day and year list totals.
After a brief stop at Scotney GP to tick the feral Barnacle Geese we went in search of Swans and managed to find a flock of 34 Bewick's and then a flock of mixed swans containing Mute, 2 Bewick's and 5 Whooper.
Before heading for home we took a detour hoping to connect with the Hume's Leaf Warbler at Brockhill Farm Woods. Parking at the monument we took the path down to the woods and heard the warbler calling almost instantly. Seeing the bird proved far more challenging, but eventually, after following little movements among the trees we enjoyed some excellent views. 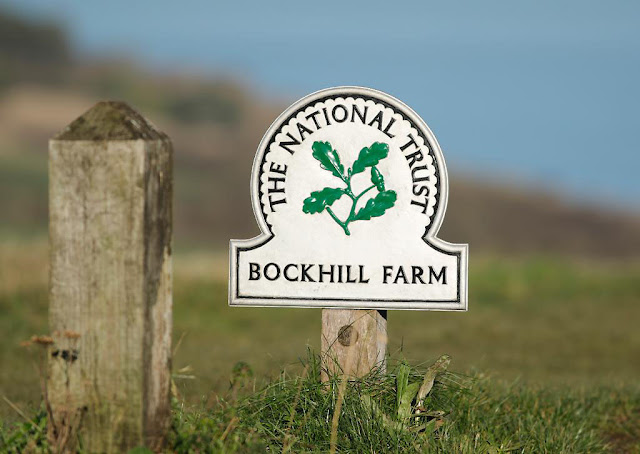 An early morning visit to Wallasea Island today, hoping the Red-breasted Goose would arrive with the Brent Geese flock to feed on the fields by the entrance track as it did yesterday.

We quickly found several Corn Buntings before walking out towards the hide. A Ringtail Hen Harrier appeared in the eastern corner and a Green Sandpiper was found on Pool Marsh. Brian spotted a Peregrine perched on a post out on the marsh and headed that way to photograph it. I headed for the hide to get a closer view of the three Spoonbill we had seen earlier on Fitzroy Lagoon. We added Pintail to the year list when 20+ were seen on Darwin Lagoon among the numerous Wigeon and Teal. The Brent Geese flock eventually appeared on the fields but unfortunately, the Red-breasted Goose wasn't among them.

Before heading for home we managed to add Mediterranean Gull to the year list with a visit to Southend-on-Sea.

Below is one of Brians's photos of the peregrine.

Another short trip this morning, saw us head down the A2 to Bexley where a Little Bunting has been present since the 14th December. We were going to follow the directions we had from the bird news services "Walk across the field to the kissing gate and climb the short slope to view" Luckily we met Geoff K as he returned from seeing the bird and he told us the Bunting was in fact feeding on the muddy path some 400m beyond this point. It showed no concern for the birders watching and photographing it and happily continued to feed on the grass seeds on and bordering the path. 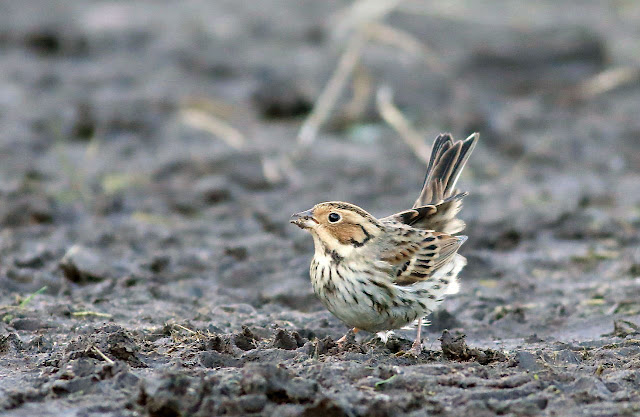 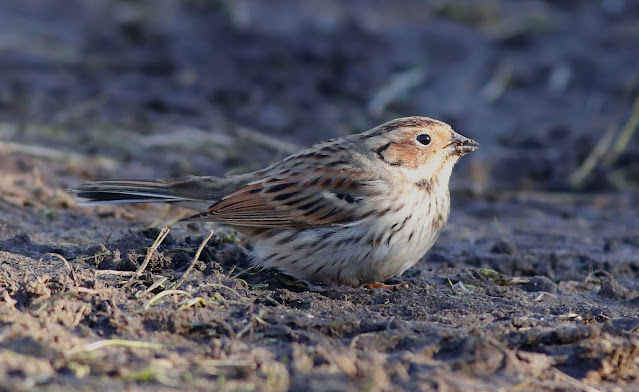 A trip to Lee Valley started well when I added Red-legged Partridge to my year list. Five birds were seen in fields before reaching the farm. The trees bordering the farm held a nice flock of Chaffinch and within that flock were at least five Brambling, for another year tick. Redwing and Fieldfare had been two glaring misses, but today both were seen together in trees around the farm.

Seventy Acres Lake proved less productive, There was no sign of the Bittern or the redhead Smew even after a fairly lengthy search. The only addition to the list was a Water Rail from the New Wildlife Discovery Centre.

A very smart-looking Silver Wood Duck was found along the River Lea.

Before heading home we stopped at one of the Epping Forest car parks and very quickly found several Mandarin Ducks. A Treecreeper was also added to the year list. 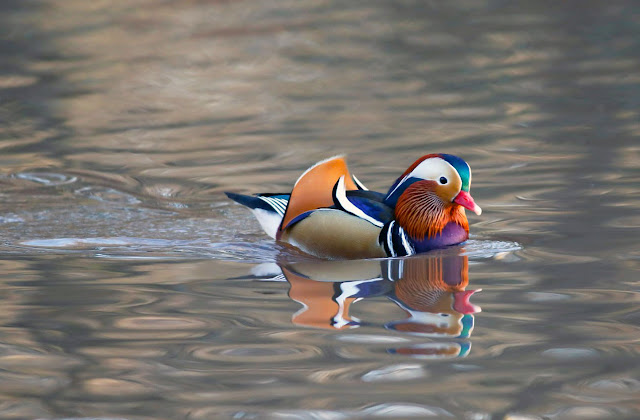 Brian still needed Red-necked Grebe, so I offered to go with him to King George V Reservoir, hoping it would still be at the site. The first bird found was the juvenile Great Northern Diver.

The Red-necked Grebe proved more difficult, usually, it is found in the south end of the South Basin but it was nowhere to be seen. Walking towards the causeway we found several Little Grebes and Great Crested Grebes and another scan from the causeway gate eventually located the Red-necked Grebe. We scanned through large rafts of Tufted Ducks and found a smart drake Scaup among them.

After arriving home dad said he had a job to do in Wanstead and with the now regular Caspian Gull just around the corner in Snaresbrook we jumped in the car with him. The bird was spotted while driving past Eagle Pond. We parked the car and enjoyed watching it for a short while before returning home. 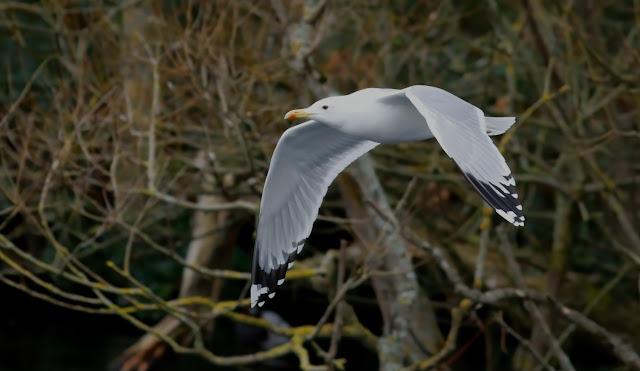 Having delayed the trip to Norfolk yesterday, We set off for Titchwell this morning, stopping on route at Southery where we found four Bewick Swans before adding Fulmar at Hunstanton.

We left Titchwell and headed for Holkham, stopping briefly at Wells to tick a Cattle Egret. After parking along Lady Anne's Drive we headed off along the footpath and emerged onto the beach. We reached the roped-off area and quickly found the four Shorelarks. The saltmarsh held 50+ Snow Bunting which we were enjoying until a dog off the lead went bounding through the flock the owner seemingly unconcerned. Before leaving we scanned the sea and had views of three Velvet Scoter and a nice raft of Common Scoter.

Normally we would spend the first day of the new year on the Norfolk coast, but with Brian unable to travel due to a hospital trip we decided to stay local and visit the King George V Reservoir. We weren't looking for big numbers, instead, we were hoping to connect with two local rarities. The first of which was a Great Northern Diver. We found it on the Western side of the South Basin. 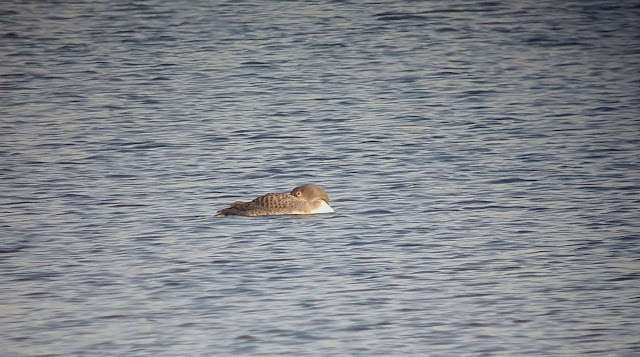 The second target a Red-necked Grebe was proving much more elusive, but eventually, it was found in the South-Western corner of the South Basin on the return walk.

Having managed to find both target birds we then spent the remainder of the visit scanning the reservoir for additions to the year list, adding two of the three winter duck species when both Goldeneye and Goosander were seen. 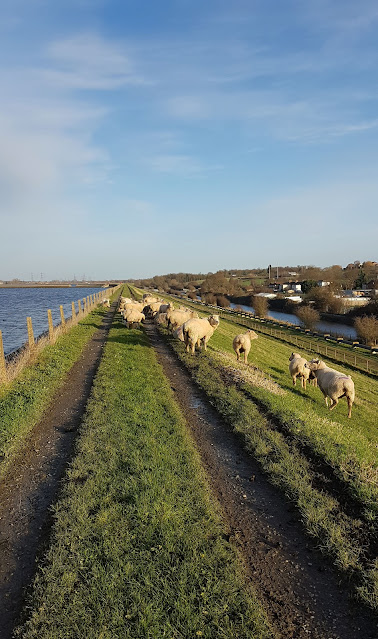 Apart from a couple of windsurfers from the Sailing Club, the sheep were the only other things present on the walkout to the causeway.

Not a big total to start the year but we were happy to have connected with our targets today.

No images may be downloaded or reproduced without permission.
©James Anderson 2012 - 2021.