Another visit to Dungeness and again it delivered!
Arriving at the lighthouses around 6.30am, we parked up and were about to head off towards the beach, when two Peregrines were spotted flying around the power station buildings. After circling the buildings they both landed on the nearby pylon allowing good scope views.
A couple of hours sea-watching followed, and although the conditions were not favourable it produced several highlights.
The first being a Honey Buzzard picked up slowly drifting across the horizon, shortly followed by a single Arctic Skua and a couple of Black Terns.
A scan of The Patch" added several species to the day total, with Great Black-backed and Lesser Black -backed Gulls along with Herring and Black-headed. Kittiwakes and Common Terns were also feeding just off the patch.
A scan of the perimeter fencing of the power station from the beach hide was also productive with Spotted Flycatcher, Wheatear and Black Redstart all added.
A call from the only other birder present put us onto a single Balearic Shearwater for another year tick!
Heading back along the entrance track we had double figure numbers of both Whinchat and Wheatear before we made our way towards ARC Pit.

As we pulled up alongside the causeway Brian spotted a Merlin flying along the distant fence line, it landed on the fence allowing good if distant scope views.
Black Terns were quickly picked out flying across the pit and the White-winged Black Tern suddenly appeared to give some very nice views. 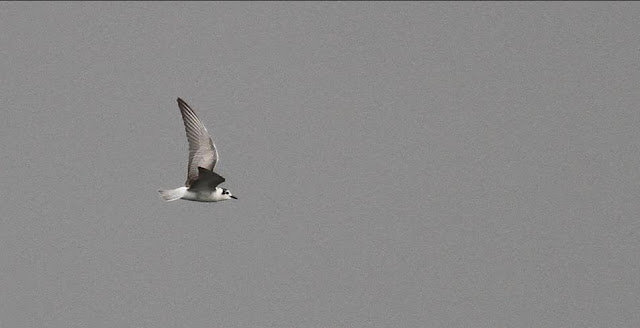 Having toyed with the idea of heading for Leysdown in search of the earlier reported Wryneck, we decided to have a drive along the entrance track of Elmley.
With the surrounding fields dried out and no water in sight they were completely devoid of any bird life. The only birds seen were a Marsh Harrier flying across the track in front of us followed by a Peregrine. Both headed quickly away into the distance.
As we approached one of the cattle grids a female Merlin was spotted perched up on the fence. We were amazed to see it remained there seemingly unconcerned even with several cars and vans passing by at close quarters. 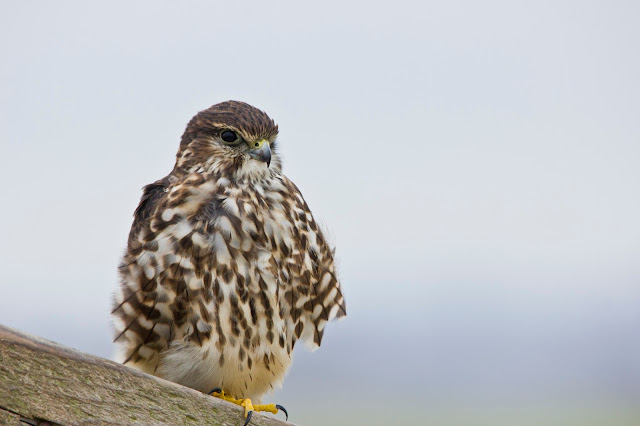 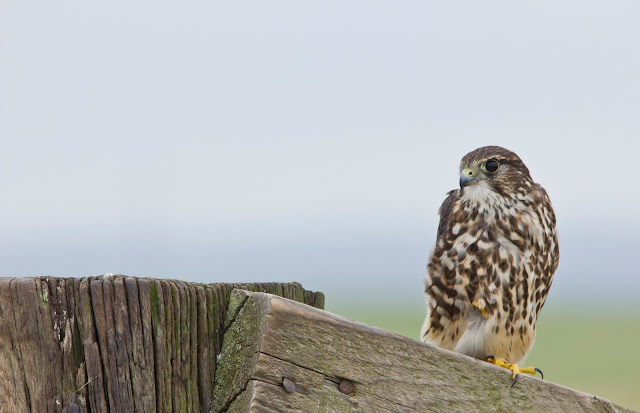 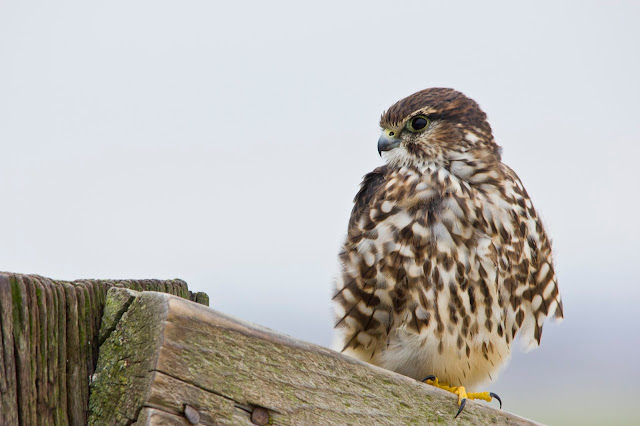 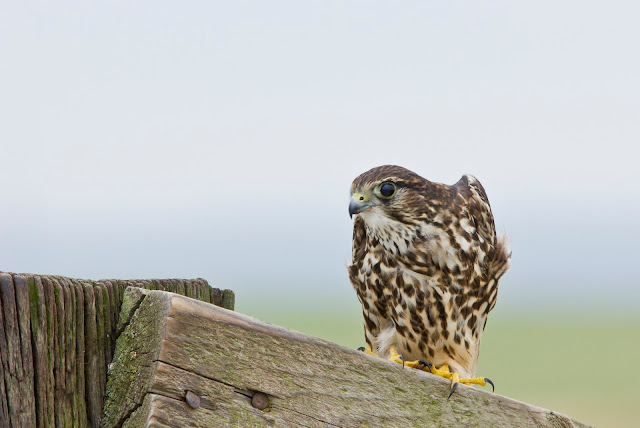 A fantastic end to another great days birding!

A fall of Yellow Wagtails at Dungeness!

Time was short today, with only the morning allocated for birding!
Ninety miles and an hour and a half later we arrive at Dungeness around 6.30am.
Driving along the road towards the lighthouses there was no indication of any big numbers of birds around, but as we neared the first of the lighthouses birds began to fly up from every piece of waste ground around us.
The majority of the birds were Yellow Wagtails, an estimated count from Dungeness Obs was c500! mixed in with these were double figures of Whinchats. Common Whitethroats seemed to be in most bushes as we scanned along with the odd Willow warbler.
The area before and after the cafe held the biggest numbers, but a walk around the moat again produced big numbers of yellow Wagtails.


Three Black Redstarts were found on the garden fence of the house leading to the Obs along with more sightings of Whinchats.
A brief sea-watch produced large numbers of Gannet and good numbers of Sandwich Terns. Common Terns were also seen but in smaller numbers as were Kittiwakes. A single Great Skua was a welcome year tick, managing to pick the bird up after it had just knocked a Gannet out of the air and into the sea! Several Swifts were also noted out at sea along with a solitary Common Scoter.

As we headed back past the lighthouse gardens, Brian finds a Pied Flycatcher perched up among the vegetation. (Another year tick). As the predicted rain arrived we managed to find a second Pied Fly from the single track road near Lydd Ranges along with one of the local Ravens.
Last stop before heading home was a quick scan from Hanson Hide across Arc Pit producing three Wood Sandpipers (one unfortunately with the use of only one leg) as well as a single Common Sandpiper and a Little Stint.

We decide to take a detour from the planned destination of Dungeness and drop in at Oare Marshes first.
Water levels look good, and a couple of scans of East Flood produces five Little Stint, several Ringed Plovers, Ruff and Curlew Sandpipers along with Avocets and high numbers of roosting Black-tailed Godwits. A pleasant surprise are a pair of Turtle Doves perched in a dead tree on the opposite side of the single track road.
Brian picks out a smallish sized wader, it's feeding in front of the reeds some distant from us and the heat haze is causing plenty of problems trying to ID it! We quickly inform other birders nearby and get a couple of locals involved. After another couple of hours there's still no positive outcome to the bird's identity.
We concede defeat and make our way to Dungeness, Having spent much longer at Oare than was intended we have little time at Dunge and the birds are thin on the ground, with only Whitethroat, Lesser Whitethroat and Stonechat seen of any note.

Saturday 15th August
The day after our visit to Oare a White-rumped Sandpiper is reported as present! Is this the bird we were struggling with in the heat haze?
Having seen the reports we found ourselves at Oare once more. A nine hour session fails to find the White-rumped, but double figures of Little Stint are seen with at least five each of Curlew and Green Sandpipers along with the same number of Greenshank. Another scan of East Flood reveals a Wood Sandpiper and a Water rail. Good numbers of both Ringed and Little-ringed Plovers are seen plus several Yellow Wagtails. A surprise bird was the appearance of a late Swift overhead! Swallow, Sand and House Martin numbers were beginning to build. A year tick came in the form of a Whinchat, well overdue and very welcome. At high tide the Bonaparte's Gull dropped in to roost on East Flood, now without the full hood seen earlier in the year.


Monday 17th August
Brain made another trip to Oare on Sunday the 16th and gets lucky when he finds the White-rumped Sandpiper in the North East corner and then on his return to the car re-finds the bird right in front of him on the muddy island.
With a hospital trip booked I am unable to go and so dad and I make the trip today, arriving shortly after 6am. An initial scan fails to find the bird, but on the second scan I find a good looking candidate feeding at the far end of the long spit in front of us. It drops behind the mud bank and reappears continuing to feed.
It has to be the White-rumped Sandpiper and a short while later as another car approaches us the bird is flushed and shows the white rump as it flies across the flood, thus removing any remaining doubts we had left. With the sun up and straight into our faces the only shot I could get was the poor record shot below, but I'm not complaining I was just happy to finally get a view of it.


The bird would not be found again until almost 1pm, A very elusive bird but after 19 hours and three visits it is finally on the life list!

A morning at Dungeness NNR

Spent another enjoyable morning at Dungeness, starting with a visit to Hansen hide where we were told there was a Little Stint on one of the islands on Arc Pit.
After a few scans it was picked out among a small group of Dunlin. A single Ruff (Reeve) was also seen feeding among the numerous Mallards and Coots. Good numbers of Lapwing were also present.
Several Little Ringed plovers were noted on the islands and after scanning back and forth along the far islands a single Wood Sandpiper was eventually located.
From here we headed for the beach, At the fishing boats we tried and failed to find any Yellow-legged Gulls among the roosting birds on the shoreline. With only the usual Black-headed, Herring, Lesser Black-backed and the odd Great Black-backed on show along with Sandwich and Common Terns.
Another scan from the beach hide opposite the power station finally produced a couple of Yellow-legged Gulls. One seen quite close eating what looked like some kind of flat fish. It eventually took to the air and after a brief rest further along the shoreline, circled back and headed for the patch. Three Common Scoter flew East followed by a single Auk species.
A good number of butterfly species were also on show this morning, Small Blue, Common Blue, Painted lady, Gatekeeper, Large White to name a few. There were also several Hawk Moths on the wall of the power station as we headed back to the car.
A drive along the entrance track to the reserve produced very little bird wise, with a family party of Lesser Whitethroats the most notable.
For the third time in as many visits we found the reserve centre closed. Not sure why this is, the sign on the door just said "sorry we are closed".
Heading back down the entrance track a surprise sighting was a Stoat running cross the road, then another and another. As we sat and watched from the car a Mink then emerged from the same area. It ran across the road and disappeared into the grass. Eventually we counted five Stoat (family party?) and two Mink. Brian managed to grab the shot below from the car window.