We made an early morning visit to Bassingbourn in Cambridgeshire today hoping to connect with the Dipper. It was first seen in late April of this year and has remained faithful to this site since.
Having encountered isolated fog patches on route, we arrived shortly after first light to clear skies.
We managed to park the car close to the bridge running across Brook Road. From here it was a short walk from the car to the beginning of the stream. This was not your typical Dipper stream. There was no fast flowing water in sight, however the water in the stream became crystal clear the further downstream we went. Suddenly a flash of white on the far bank alerted us to the Dipper's presence. Having spent a couple of hours watching it feeding and preening, the calm was broken by a dog owner who decided to throw a stick into the water, the splash was quickly followed by two dogs! Seeing me further along the bank with camera in hand didn't stop him from throwing the stick in another couple of times!
At this point I gave up and headed for the car. 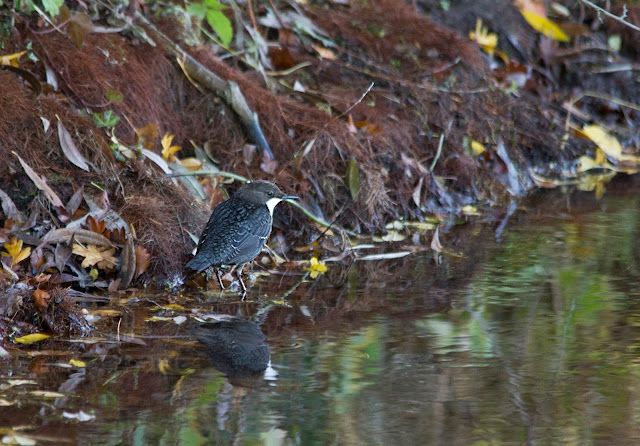 We drove along the M20 on route to Dungeness this morning not really knowing what sort of weather conditions we were heading into. Storm Angus was predicted to hit much of the East coast overnight and into the following morning.
We encountered very little in the way of storm damage on route, but you could feel the car being buffeted around by the strong winds and after parking up along the entrance track at Dungeness RSPB Reserve we couldn't even open the car doors, the winds were that strong.
Luckily we were parked up close enough to scan the pools by Boulderwall Farm. The drake Ring-necked Duck was found almost immediately as was the Cattle Egret. The Ring-necked Duck must have thought it was on the sea!

We decided on a brief seawatch at the fishing boats, and soon found out just how strong the winds were. Forcing the car doors open we tried to make our way to one of the boats, but the winds were hitting us from every direction. It was impossible to walk in a straight line and you just had to walk in the direction the wind took you! While I hung on to my scope, Brian ran off along the beach front trying to recover his hat before it reached the sea. We tried to take shelter in front of one of the fishing boats, but the winds were whistling through the double hulled boat intensifying the strength of the winds! There wasn't much movement out to sea, with several flocks of Common Scoter along with Gannets, Great Crested Grebes, Kittiwakes and a couple of Red-throated Divers being the highlights! A couple of Turnstones and a single Sanderling were noted along the shoreline.
There were plenty of large gulls roosting on the shingle and a few scraps of food bought them in closer. Unfortunately there was no sign of anything rare today. 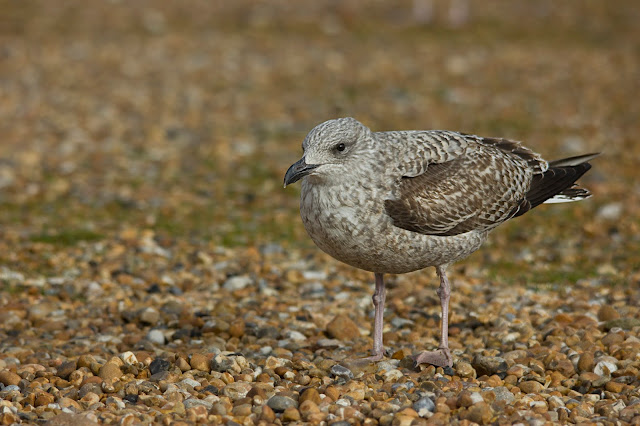 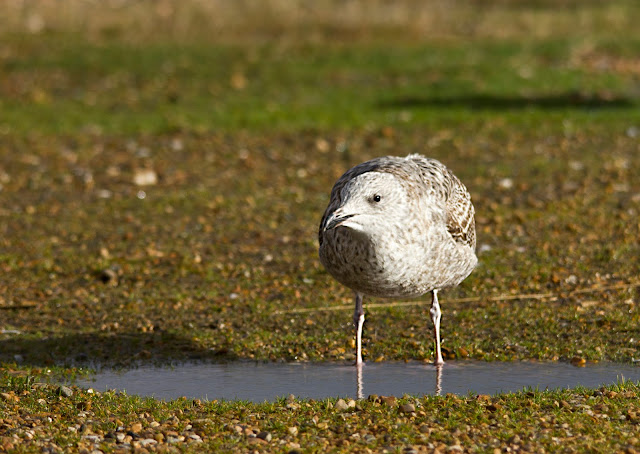 Before heading home a Buzzard was watched feeding on worms and perched up in nearby trees and fence posts and four Bewick's Swans were found among a group of Mute Swans. 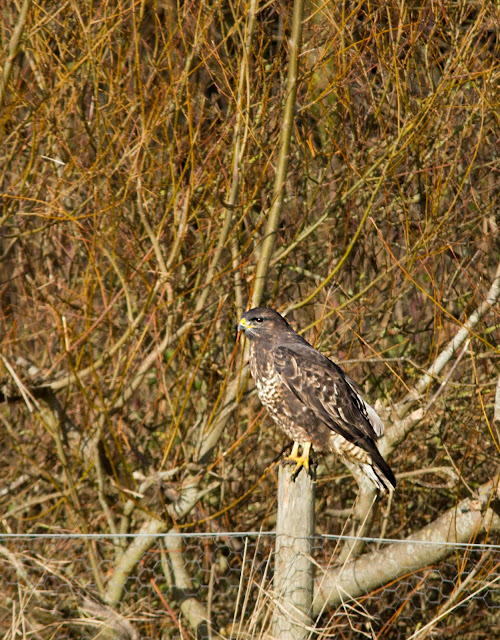 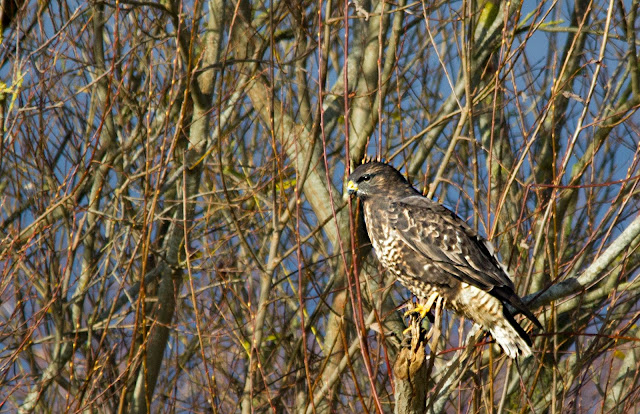 Breaking news early this afternoon of the presence of a possible Forster's Tern at Mistley in Essex, The possible turned into a positive ID at 1.45pm.
A mad dash around the house duly followed and after meeting Brian around 2.30pm we set off up the A12. The race against the fading light began and luckily there were no hold ups on route. We reached the Quay to find only two other birders present. Both had seen the bird only minutes before we arrived, and told us that it had flown out towards the two green buoy's in the distance.
The car park quickly filled with cars and birders were soon lined up along the Quayside. I decided to train the scope on the area around the two green buoy's and the large boat between them, and I was rewarded when the 1st winter Forster's Tern suddenly appeared over the right-hand buoy heading straight towards us! A quick call to the gathered birders got them on it,  before it turned and flew low across the water's surface heading towards the two boats that were moored up. With the light fading fast this was to be the only views we had of the bird, but we stayed at the Quayside until the light had completely gone. 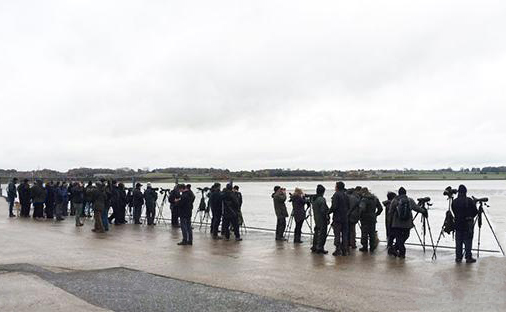 Today's individual is only the 2nd record for Essex, the first being in 1998 when another 1st winter frequented the West Mersea, Hamford Water and Tollesbury area's from the 16th November until the 24th April.  when it crossed the Essex/Suffolk border today it also became a first record for Suffolk!

Another very welcome if an unexpected addition to the life list.

A trip to Norfolk this morning in search of Waxwings, started with a 2 hour seawatch at Cley. Almost immediately a single Little Auk was seen flying low and fast heading West towards Blakeney. It would be the only one seen during the 2 hours.
Long-tailed Ducks were seen and close scope views were had of a pair as they dropped down onto the water relatively close. Plenty of Red-throated Divers were seen flying East and and 2-3 sat on the sea close to the shore. Small numbers of Gannets were also seen along with five male Eiders providing another welcome year tick.
We left Cley and headed towards Burnham hoping to connect with some Waxwings. The reported birds around Burnham Overy Staithe failed to appear so we set about trying to find our own. Which we duly did when we reached Burnham Norton. Driving the back roads we came across a flock of 20+ birds perched on telegraph wires and nearby trees.
Light conditions were terrible, very grey overcast conditions with light rain mixed in, but that didn't stop us trying to get a photo. 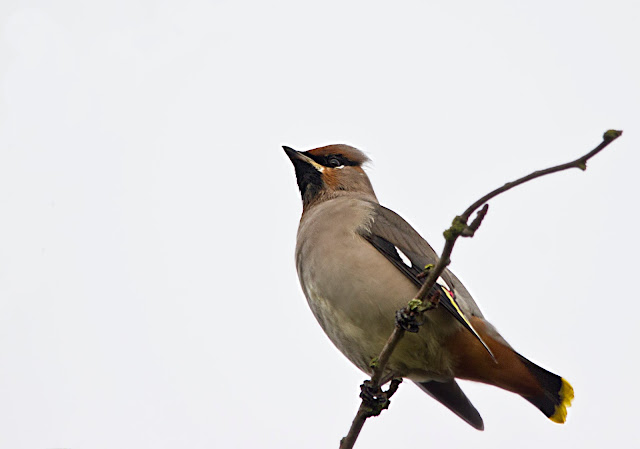 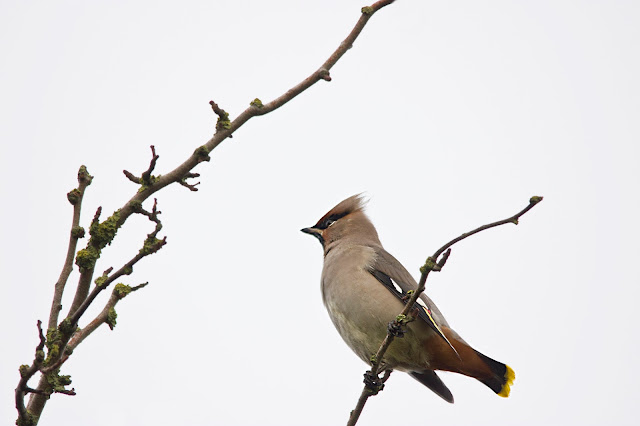 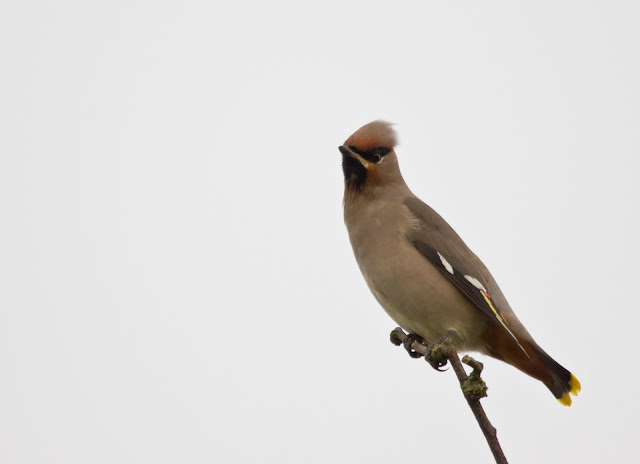 A brief stop at Brancaster, with the usual Turnstones and Redshanks present. A single Grey Plover was also busily feeding on the exposed mud. 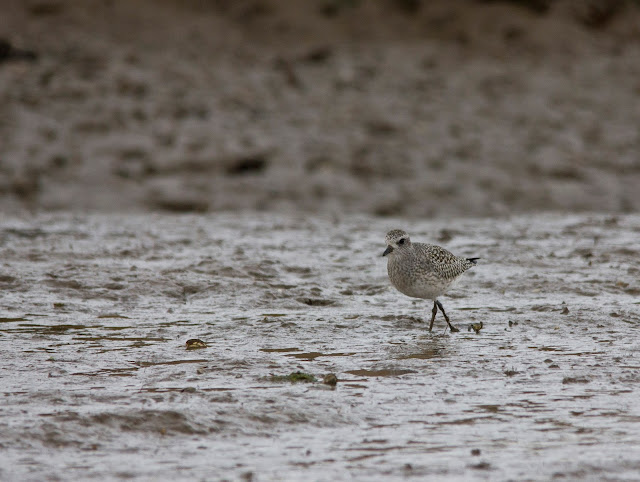 A stop at Ttichwell for coffee allowed a brief seawatch from the beach. Producing 3 Velvet Scoter among a flock of Common. Several Red-breasted Mergansers were also seen close by.
There was plenty of activity along the shoreline with Sanderling, Black-tailed Godwits, Grey Plover, Knot and Oystercatchers all present.

Before heading for home we took another drive to Burnham Norton, but the Waxwings had moved on to feed elsewhere. We did the same!