A leisurely Sunday morning took an unexpected turn early afternoon when reports came through that a Little Bustard had been flushed off the seawall at Slimbridge!

Problems lay ahead if we were to make the trip. We were one hundred and fifty miles away and last admission times for the reserve were 4.30pm. Fortunately, news came through as we were leaving that the reserve was allowing hourly escorted access from 5pm-8pm.

We pulled into the Slimbridge car park at 5.05pm having encountered road closures on the M4. We had missed the 5pm access by 5 minutes! Thankfully another staff member arrived earlier than expected at around 5.30pm and after we paid the £10 entrance fee he kindly escorted us onto the site.
As expected there was a sizable group of birders already situated on the seawall overlooking the "Dumbles". Shortly after arriving we had our first view of the Little Bustard, it was just the head popping up above the long grass and these views continued at regular intervals for the next 2 hours. Sometimes it was just the head, sometimes it was the head and neck. Then around 8pm the bird suddenly appeared in a more open area and gave almost full body views before disappearing back into longer grass again.


There were a few birders present! 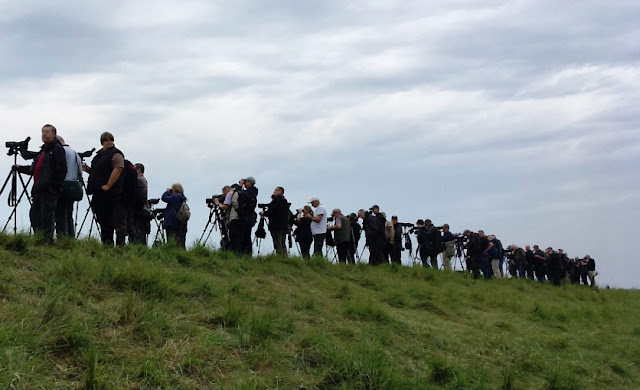 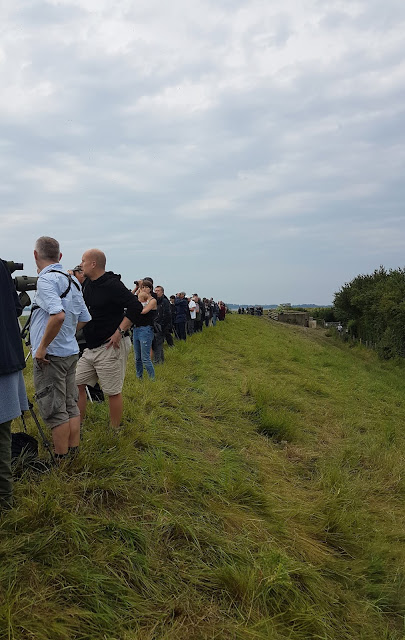 Plenty of familiar faces were present during the time we were there, many of whom like us had missed the East Yorkshire bird at Fraisthorpe Sands on 31st December 2014-1st January 2015.

Many thanks to all staff and volunteers who gave up their time, some coming in on their days off to allow us access to the reserve after hours, it was greatly appreciated.
Posted by Jim No comments:

At 9.32am this morning the bird news services reported a Pratincole species present at Frampton Marsh. But with only the bird's head visible in the grass ID was proving difficult. Then at 9.55am it took flight and was identified as a Black-winged Pratincole.
A phone call from Brian asking if I wanted to go for it, was all I needed and soon we were heading up the M11 and A1(M) towards Frampton. Although the traffic was relatively free-flowing, it was still an anxious journey as the Pratincole was a lifer for me, having dipped the Cambridgeshire bird back in 2014, and no news of the bird had been reported since we left home. Luckily as we approached Frampton positive news was posted on Twitter.

We walked along the track and joined the assembled group of birders who already had the bird in their scopes. It was resting on the wet grasslands and apart from a very short flight (no more than six feet) remained there for the next two hours. 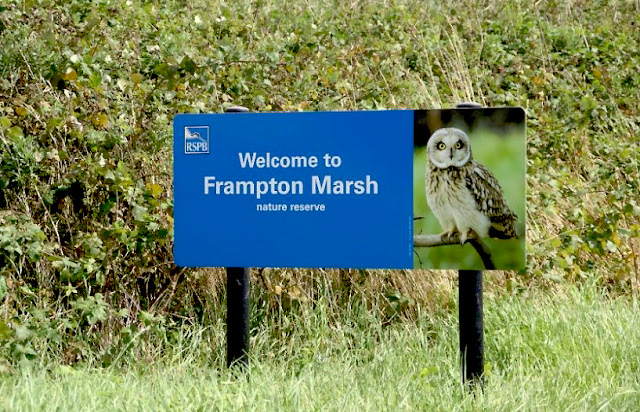 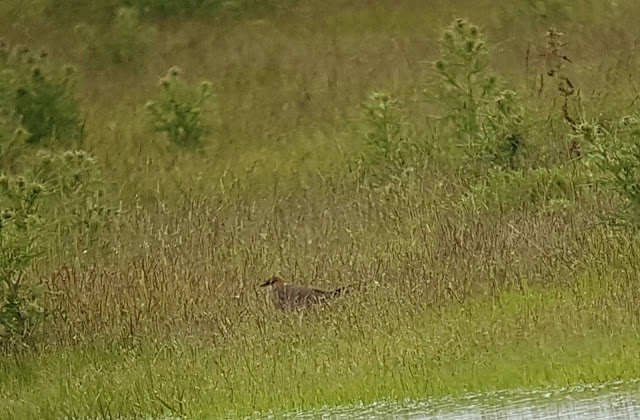 Although these birds are classed as waders they typically spend more time catching insects on the wing, much more like Swallows.

Shortly before 6.30pm the bird suddenly took flight and headed across the track by the old car park and began hawking for insects over the top field, after several circuits of the field it flew over the grass bank and was lost to view. Sadly for the birders just arriving it was not seen again.
Posted by Jim No comments:

An evening with Nightjars

This evening we visited our usual site for Nightjars. A  full moon had been predicted and we were hoping this would encourage more activity than normal. We arrived around 9pm and walked along one of the main tracks. By 9.10pm we had already had a short burst of "Churring". As I was walking the track I managed to add Woodcock to my year list when a single bird flew overhead. As we reached the crossroads the real action began. It was only 9.25pm and still relatively light, but the first Nightjar appeared. It was a male bird and it flew around just feet away calling and "Wing Clapping". As the evening progressed we had regular sightings of both male and female Nightjars. One individual even landed in a nearby tree several times during the evening.

We spent a wonderful couple of hours with these cryptically plumaged birds, without doubt, the best experience I have had with this species so far. 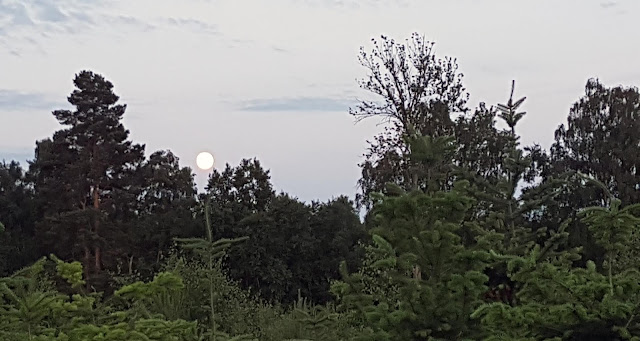 The photo below is of the only day time sighting of a Nightjar I have enjoyed so far. Seen at Middlesex Filter Beds in 2014.

Leaving home this morning we had three targets in mind. The first of which was the Quail at Hazelwood Common. We pulled into the small car park off Saxmundham Road shortly before 7am and headed West along the footpath all the time listening for the unmistakable sound of the Quail. We walked the length of the first field and shortly after reaching the Southwest corner the Quail's distinctive "Wet my lips" call began. It called several times and then took flight and headed across the footpath back into the Pea field. 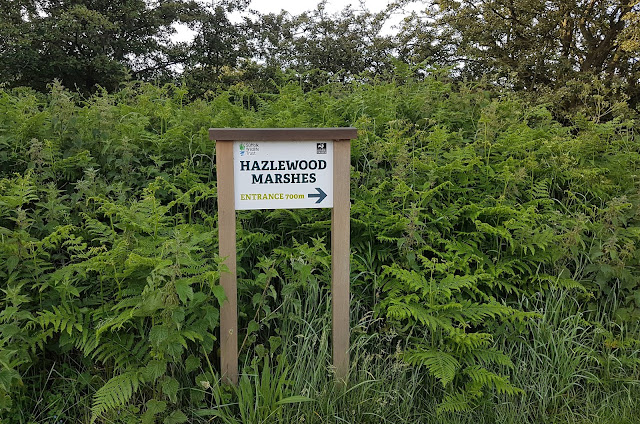 From Hazelwood, we headed twenty miles Northeast and stopped at Kessingland, Lowestoft hoping to find the Woodchat Shrike. We walked along Cliff Farm Lane passing the caravan park then took the top path all the way South checking all the trees and bushes as we went. With no sign, we returned to the beach steps and headed down onto the beach. Having spent over 2 hours searching all the cliffside trees, bushes, and scrub along the beach we had to admit defeat.

We headed further North along the coast and stopped at Horsey, hoping for better luck finding the Lesser Grey Shrike. The weather by now had taken a turn for the worse and the winds and rain made searching for the Shrike challenging. The Shrike had been seen earlier this morning and after an hour's searching the bird suddenly appeared on the fence wires North of the Green Shed. It made several short flights along the fence line before flying West into the field North of Nelson's Head Track, where we relocated the bird sitting out on a tree branch on our way back towards the car.

Leaving home this morning at 5am, we were a little anxious, to say the least. We have not had much luck when birding up North. Dipping the Scops owl in County Durham and more recently dipping the Brown Shrike and Collared Flycatcher.
Two hours into the four-hour journey positive news came through via Twitter that the bird had remained overnight. We arrived on site shortly before 9am only to be told the bird had been seen by some of the hundred or so birders present but it had disappeared and not been seen since! I scanned the distant hedgerows and picked out a yellow blob within the hedge, it looked good, Brian took a look through the scope and confirmed it was the Bunting. Having told the birders around us that we had re-found the bird, the walkout along the public footpath began. We had superb scope views of the bird and I managed to grab a few photos with my phone held up to the scope. 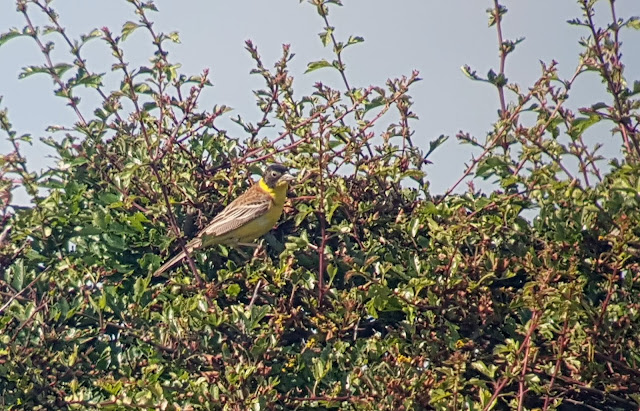 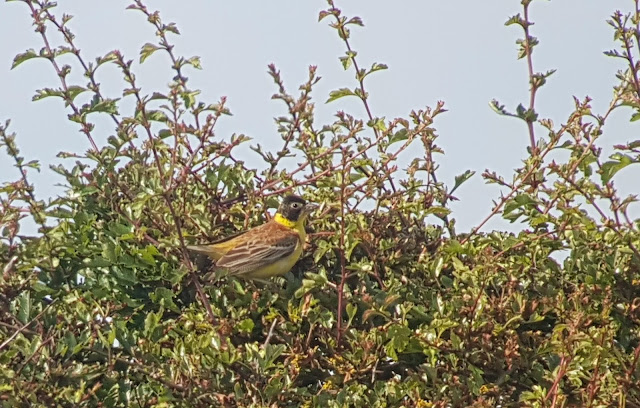 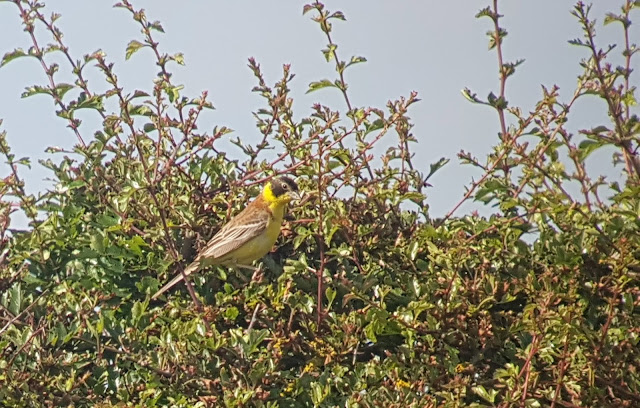 Along with the Black-headed Bunting a female Subalpine warbler had also been found yesterday. It had been found in Willows running alongside Flamborough Head Golf course close to the Lighthouse car park. Although it had been seen again this morning it was proving to be very elusive. Common and Lesser Whitethroat, Blackcap and Tree Sparrows all appeared within the Willows and after an hours search so did the Subalpine Warbler. Mostly hidden within the Willows and Wild Rose Bushes it did pop out long enough to get some nice scope views.

To break the returning journey up we stopped at Welbeck Raptor Watchpoint in Nottingham, hoping a Honey Buzzard would make an appearance. But in the hour's search, we only saw Common Buzzards in the air.
Posted by Jim No comments:

Having failed to connect with the Broad-billed Sandpiper at the weekend (mainly due to arriving at high tide) we gave it another go this morning. The timing was perfect today arriving at low tide and the water still receding. Unfortunately, the Sandpiper could not be found despite extensive searches. During the morning the Dunlin and Ringed Plover flock grew from six birds to over twenty but the Broad-billed Sandpiper never appeared among them. Although the number of birds was not present we did manage to see Ringed Plover, Dunlin, Avocet, Redshank, Turnstone, and Curlew feeding on the muddy foreshore. Barn Owl and Marsh Harrier were seen hunting the far banks and Reed Bunting, Sedge warbler, Whitethroat and Swallow were all seen and heard close by. After four hours the Sandpiper had still not appeared and with rain falling and the tide coming in we admitted defeat and headed for home.

As we approached Waltham Abbey Brian offered to make a small detour and give me the chance of adding Ring-necked Duck to my London List. We started the search at the Southern end of Seventy Acres Lake and after arriving at the Bittern Watchpoint we eventually spotted the duck close to the bridge separating Seventy Acres Lake and Hooks Marsh Lake. We managed closer views as we continued walking East towards the car park. 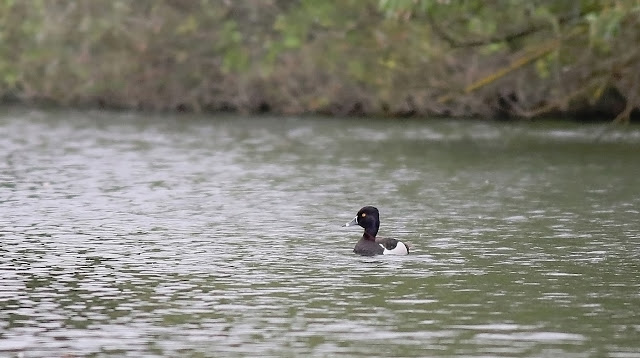 It wasn't the bird we set out for this morning but it was a good bird for the Valley and a nice addition to my London list.
Posted by Jim No comments:

An Iberian Chiffchaff had been reported as "singing" in the scrub below the Coastguards cottages on the 27th May. I need this bird for my British life list, but with Brian away in Wales all week on a family holiday, getting down to Dunwich Heath had proved difficult. Worse was to come during the week when Brian picked up an Iberian Chiffchaff in Pantmaenog Forest in Pembrokeshire!
Luckily the bird had remained in the scrub around Centenary Pond all week, and Brian having now returned kindly offered to drive us there this morning.
We followed the path from the car park down to the pond and soon heard the Iberian Chiffchaff singing from within the trees. It took a while to locate the bird among the thick tangled branches but it eventually showed very well in the treetops on the opposite side of the pond.

A casual stroll around the reserve was enjoyable but didn't produce any additions to the year list. Kittiwakes, Med Gulls, Common, and Little Terns were all seen, but there were very few wader species present.  The gorse bushes below the beach held good numbers of Stonechats and there was a Dartford Warbler busily collecting food items. A Cuckoo flying very close by was a nice surprise. As was the Grasshopper Warbler we heard reeling and it even showed briefly before disappearing deeper into the brambles.

On the way home, we dropped in at Orford hoping to see the Broad-billed Sandpiper, but unfortunately, the tide had already come in and with no exposed mud the bird had disappeared, later it would be relocated on the airfield on the opposite side of the River Alde.