After positive news yesterday of the continued presence of the Hoopoe, we made the two-hour drive along the M25 and M3 and were parking up by the horse paddocks along Badminston lane in Southampton shortly after 8am. Initial scans of the paddock failed to produce any sign of the Hoopoe, mainly due to the presence of a guy tending to the horses.

In previous days the Hoopoe could be quite wide-ranging and several birders began wandering off along the tracks hoping to locate it. We remained by the paddocks and were rewarded twenty minutes later when the Hoopoe flew in. It stayed for less than one minute and then flew off. We managed to re-find it along the track but it quickly took flight again. While searching for the Hoopoe we watched three Woodlarks displaying overhead for another addition to the year list. We decided to return to the horse paddocks and wait it out. This proved a wise move as the Hoopoe eventually reappeared and this time happily fed among the short-cropped grass close to the horses. 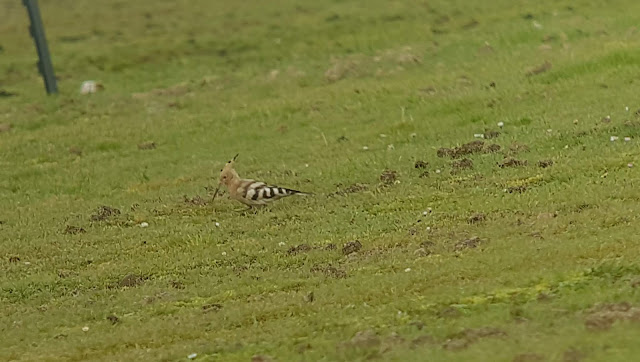 Keyhaven Marshes was only thirteen miles away and we were soon parked up by the sea wall car park along Lower Pennington Lane. We took the main path and found a single Spoonbill on Fishtail Lagoon, unfortunately, it took flight and headed over the far bank of trees towards Keyhaven Marshes. After walking the sea wall to the end of the path we managed to find the Spoonbill resting at the far edge of the marsh.