Having made the trip to Worthing last Saturday for the male Desert Wheatear, We arrived only to find that the bird had flown the previous evening.
Then on Sunday a female is reported from Abberton, but it's too late to make the trip and with work making it impossible to try for it during the week.
Brian is more mobile during the week so bags the bird on the Monday before work, and I'm left watching the reports and hoping that the bird will stay put all week.
To my surprise the bird is reported every day right up to friday afternoon. So with Brian down in Norfolk for  the weekend it's just dad and myself who make the trip to Abberton.
An hour after setting off from home we are pulling in behind the workmen's cars just outside the gates of the reserve.
One birder is just about to leave and tells us that the bird has been showing well. Once in the car park we scan the fence posts with no sign of the bird, Then Bingo! the bird appears on a post by the parking bays. 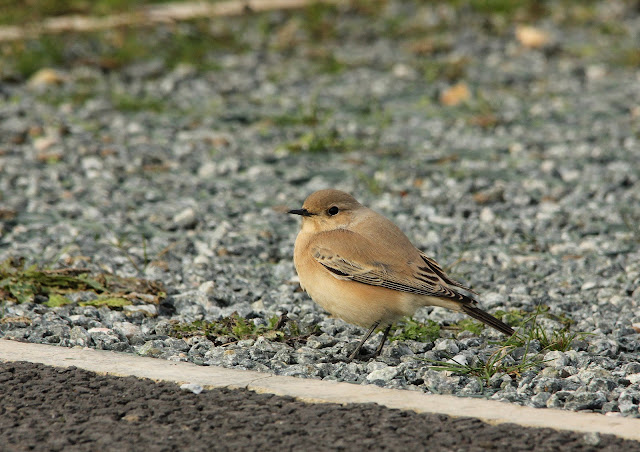 We watch it for a good 15-20 minutes before we are joined by another birder.
The skies are heavy with cloud and it's not long before the rain starts to fall so we decide to head onto Cudmore Grove CP.


First stop is the pool just beyond the bird hide, We get good views of Black-tailed Godwits, Teal, Wigeon and there's high numbers of Common Snipe present.
While scanning the snipe I find a Jack Snipe feeding along a narrow strip of mud. We got Jack Snipe here last year while watching the Grey phalarope that was present, and it's a nice year tick for this year also.
From here it's off down the grass track and on towards Stone Point.
Brent Geese are feeding in large numbers in the fields, with a c600 birds. There's a single pale-bellied bird seen among them.
At the point we find a single Snow Bunting among the shingle and 2-3 Rock Pipits along with a couple of Meadow Pipits.
There's large numbers of Golden Plovers feeding on the mudflats along with Grey Plover, Ringed Plover, Knot, Curlew, Lapwing and Black-tailed Godwits.


With the skies showing signs of clearing we head back to Abberton hoping to grab a couple of shots of the Desert Wheatear.
On arrival the car park is packed and the bird is showing superbly well. While we are there the bird spends all it's time on the tarmac and approaches ridiculously  close when someone throws down a few mealworms. 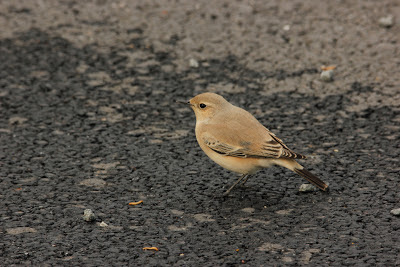 One guy turns up and asks if the bird is showing, only to be told it's two feet in front of him. Obviously not close enough for everyone.

We head for home very happy.