The first visit to Dungeness this year started with a brief Seawatch from the hide. In freezing conditions, we managed to add Gannet and razorbill to the year list. There were various sized flocks of Guillemots and several Razorbills flying past east. A flock of seven Red-throated Divers flew east and two Kittiwakes were also seen.

We headed back along Dungeness Road and drove along the entrance track, stopping to search for Tree Sparrows. Disappointingly we didn't find any in the front or back garden of the lodge. It's the first time in ten years of visiting that we have failed to see this species here. I hope we were just unlucky and it's not a decline of this species at Dungeness. A male Smew was found onTanner's Pool and a Great White Egret was in the same area. A walk along the track to Hooker's Pit produced a well overdue Cetti's Warbler and also several "pinging" Bearded Tits.

We left Dungeness and headed fifteen miles north along the coast to Hythe. Where we found two Purple Sandpipers on the groynes opposite the  Hythe Bay Seafood Restaurant and Bar.

The final stop before heading for home was to Chatham Maritime Marina where after a quick drive around the marina we located two of the three Shag on basin No2.

Cliffe Pools, The search for Grebes

With limited time available today, we decided to visit Cliffe Pools and try to locate the two species of Grebes we were missing this year. Alpha Pool had been host to both Red-necked and Black-necked Grebes in recent days so we were hopeful of locating them this morning. It's a bit of a challenge to reach Alpha Pool and with the amount of rain, we have had recently the footpaths were very muddy. Upon reaching the pool we began scanning through the masses of Little Grebes (they seemed to be everywhere we scanned on the pool) and eventually located a single Black-necked Grebe at the Southern end. With no sign of the Red-necked Grebe, we walked further north towards Cliffe Fort and found the Red-necked Grebe close to the bank in front of the disused jetty of the former Blue Circle Sailing Club. 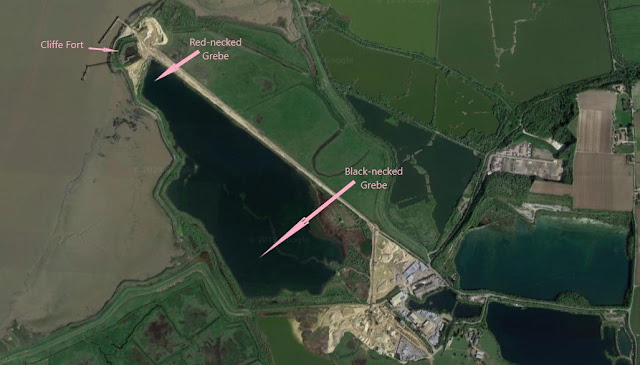 We returned to the car park and took the footpath towards Flamingo Pool passing Cliffe Creek on the way.

No new additions to the year list were added from the creek or Flamingo Pool, but there were large flocks of Lapwing and Golden Plover to be seen along with double figures of Skylark several Redshank and a single Avocet.

Rainham Marshes, A first visit of 2020

This afternoon we visited Rainham Marshes and took a walk along the foreshore of the Thames. We parked at the Riverside car park and scanned the Concrete Barges for any sign of Rock or Water Pipits. Unfortunately, there was no sign of either species today.

We continued along the footpath and as we reached the "Land and Water" platform we found five Common Snipe resting among the rocks.

As we approached Aveley Bay we added another year tick when a Yellow-legged Gull was found among the numerous other gulls. We managed some decent scope views before it flew off towards the landfill. From here we walked along the sea wall towards the reserve centre. We checked every rock along the route and were rewarded with excellent views of both Water and Rock Pipits. We didn't have time to walk around the reserve so scoped the pools from the sea wall. After several scans, Brian managed to pick out two Ruff among the large Lapwing flocks. It was a short but productive visit with five additions to the year list and only 30 minutes from home.
Posted by Jim No comments:

The main target this morning was the Hawfinch at Lynford. Arriving at first light we made our way towards the "Paddock", on the way stopping at the bridge and connecting with Marsh Tit, Coal Tit, Greenfinch, Nuthatch, and Siskin. All of which were new additions to the year list. Scanning the paddock several Redwing were seen as well as Mistle Thrush and Song Thrush. Another scan of the area and the first Hawfinch is seen. During the visit, we had five separate sightings of Hawfinch of at least two individual birds.

A walk around the outer boundary fence of the paddock added more Marsh and Coal Tits plus Nuthatch and Treecreeper. I added a female Bullfinch to my year list but it disappeared just as quickly as it appeared. On the way back to the car we stopped again at the feeding station and added a surprise year tick with a Yellowhammer.

The remainder of the day proved less productive, but we did manage to get some nice scope views of a Goshawk when we stopped to scan the displaying Buzzards

On route to Halstow Marshes in Kent, we stopped off at Eagle Pond in Snaresbrook and quickly located the adult Caspian Gull. It was loafing at the back of the pond in the company of two Canada Geese and a Cormorant.

Traveling along the A2 towards High Halstow, we had very little information as to where to park, so we called in at the RSPB Northward Hill Centre. The staff were very helpful and we were soon following the directions to Clinch Street to begin the long walk out towards Egypt Bay. The walk to the bay was around 3km and the only person we saw was Kent birder Barry Wright who was on his way back. A quick chat and we learn some very helpful info on the best areas to look for the Richard's Pipit. I picked up a couple of year ticks on route with two Reed Buntings and a flock of nine Stock Doves. The next hour was spent trying to pin down the Richard's Pipit. It was constantly on the move. Finally, with some patience, we managed some decent bin and scope views. 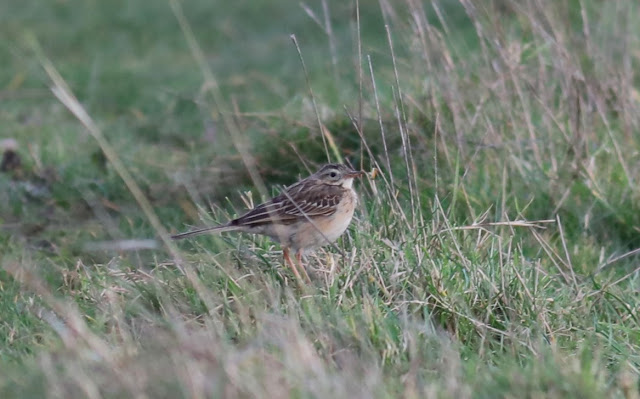 As we approached the final wooden stile we were rewarded with a superb Barn Owl perched in a small tree. It soon began to hunt along the edges of the field and was a nice reward for the 7.5km (4.6mi) walk out and back.
Posted by Jim No comments:

Flush with our successful trip to Abberton yesterday and with better weather forecast today we hatched a plan to see a few more quality birds today. We began with a visit to Buckenham Marshes and despite the early morning sun making viewing difficult we managed to locate the Taiga Bean Geese shortly after arrival.

With the plan off to a good start, we headed seven miles North-East and stopped at Acle Bridge. Shortly after parking the car we were looking at twenty-five Common Cranes.
Ludham Bridge was our next destination and again we connected with both Whooper and Bewick's Swans immediately. We also added Golden Plover to the list when a flock of 50+ birds was seen.

The main target today was the Desert Wheatear at Eccles-on-Sea and we were now only 10 miles away from it. After parking, at Cart Gap pay & display car park we walked along the beach and found the Wheatear busily feeding among the concrete sea defenses.

Heading back down the East coast we stopped at Hollesley Marshes in Suffolk and found a Peregrine perched in a tree a short distance from the car park. The main target here was the Siberian Stonechat and we found it in the field next to the winter flood shortly after arriving. It then flew to brambles close to the sea wall, giving superb views before it flew back into the thicker cover of the reedbed

Our final stop of the day was to Shingle Street where we spotted a Short-eared Owl perched on a metal post in front of one of the resident's houses.

I ended the day with another twelve additions to the year list and for the second day in a row, we had connected with every single target on our list.

After the full days birding in Norfolk on New Years Day, we decided to stay closer to home and visit Abberton Reservoir.

Heading up the A12 we had several targets in mind. We started the day at Layer Breton Causeway and quickly spotted a male Goosander and two redhead Smew. We then turned our attention to the large flock of Tufted Ducks hoping to find the Ring-necked Duck among them. The Ring-neck could not be found despite several lengthy searches, but we did find four male Greater Scaup.

The light rain that had been falling all morning had now become much heavier so we made our way to Wigborough Bay and took shelter in the hide. Although we were now out of the rain the bay itself proved less rewarding with only three Great White Egret of any note.

At Billets Farm viewpoint we added Stonechat and Skylark to the new year's list before moving on to Layer de la Haye Causeway. Another Redhead Smew was found along with good numbers of male and female Goosanders. Then a real surprise, a Swallow was spotted flying low along the causeway! Whether it can find enough food to survive is unlikely but I hope it can.

The idea of driving eighty-eight miles to Eccles-on-Sea for the Desert Wheatear was talked about but quickly dismissed, and instead, we headed for Abberton Church which was only five miles away. This proved to be a very good decision as we managed to find good numbers of Corn Bunting on the fence wires on the walk down to the viewpoint. A male Merlin flew low across the water and dropped onto a small island causing panic among the ducks. The large flocks of Teal took to the air and re-located closer to our position. Scanning through the flock we managed to find the Green-winged Teal among them. The Green-winged Teal had not been reported at all the previous day, so we were very happy to find it today. Another scan of the reservoir and the Black-throated Diver is also found!

We ended the day back at Layer Bretton Causeway and eventually found the Ring-necked Duck among the Tufted Duck and Pochard. As we were leaving for home a Kingfisher was spotted among the overhanging branches.

The weather today was miserable with constant grey skies and a mixture of light and heavy rain, but thankfully the birding was the complete opposite.
Posted by Jim No comments:

No images may be downloaded or reproduced without permission.
©James Anderson 2019.